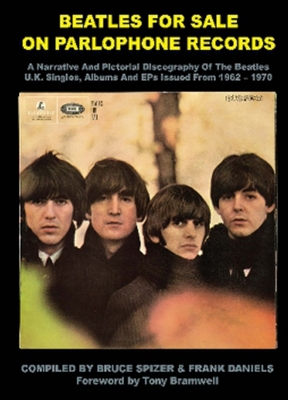 
Email or call for price
Beatles For Sale on Parlophone Records covers all of the singles, albums and extended play discs issued by the Beatles in the U.K. from 1962 through 1970. Each record is given a separate chapter, which tells the stories behind how the songs appearing on the disc were written and recorded. The chapters also detail how the records were marketed and contain sales and chart information. The book has chapters on the history of EMI and Parlophone Records, how records are mastered and manufactured, how EMI contracted with other record companies to press Beatles singles and albums to help meet demand, British radio and record charts in the sixties and other record-related topics. The book has over 700 illustrations, all in either color or original black and white.

Bruce Spizer has written eight critically acclaimed Beatles books, including The Beatles Records on Vee-Jay, The Beatles' Story on Capitol Records, The Beatles on Apple Records, Beatles for Sale on Parlophone Records and The Beatles Are Coming! The Birth of Beatlemania in America. He has appeared on several national television programs (ABC's Good Morning America and Nightline, CBS's Early Show, CNN and Fox National News) and radio programs (NPR, ABC, BBC) as a Beatles expert and has given presentations at the Grammy Museum, the Rock 'N' Roll Hall of Fame and Museum, the American Film Institute, the Paley Center for Media, the Newseum, New York's Lincoln Center and Beatles conventions throughout the United States and in Liverpool, England. Bruce serves a consultant for Universal Music Group, Capitol records and Apple Corps, Ltd. on Beatles projects.