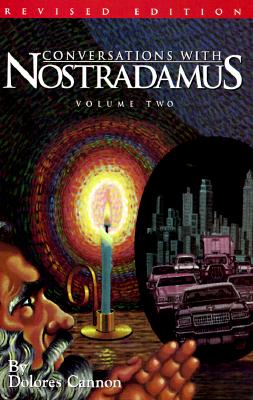 This is book number 2 in the Conversations with Nostradamus series.

The second book in the series contains 143 additional quatrains written and deciphered by Nostradamus himself. Dolores Cannon has pierced the veil of the space/time continuum by her use of regressive hypnosis, to bring us warnings of events to come. Nostradamus emphasized that humanity could change the future if they knew which of the multiple time-lines they were traveling on, and what the results of the path were. Humanity is not powerless. Through the power of informed minds much of the horror seen by Nostradamus can be averted. These new revised editions of the Conversations with Nostradamus trilogy contain updates of events that have already occurred since the original printing in 1989. Will the others also occur? Fasten your seatbelts, you're in for a mind blowing ride with this one! You're about to take a flight into a place where time doesn't exist. Where the famous quatrains are decoded by no-other than The man Nostradamus himself. These two volumes are an exciting journey into the realms of timeless and metaphysical adventure. "Fabulous reading and extremely well written." - Friends Review. This volume includes: More about the rise and the location of the Anti-Christ, including his horoscope. The correlation of 666 (the mark of the beast) and computers. More about the third world war and what countries will be affected. How AIDS was a planned disease by those in power, and when the cure will be found. Dangerous new technology to control the weather and earthquakes. Maps showing the portions of the continents that will remain after the axis shift and the melting of polar icecaps. Horoscopes estimating the date of the Earth shift, as based on Nostradamus' quatrains. The role of Space Visitors during this time of tribulation. A look at the world of future after the war and the shift.