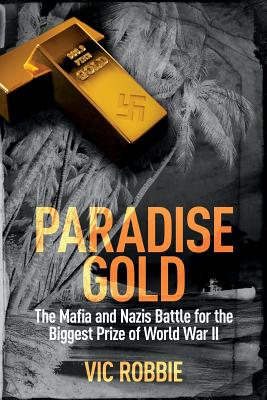 This is book number 2 in the Ben Peters Thriller series.

THE US GOVERNMENT AND MAFIA JOIN FORCES.

In World War II Nazi U-boats dominate the Atlantic from their base in the Caribbean, sinking American and Allied ships. And the US government enlist the help of the Mafia to prevent Germany stealing a fortune in French gold. Caught between ruthless Germans and Mafia assassins, only American agent Ben Peters knows the Nazis' terrifying plans for America. But first, he has to deal with two beautiful and dangerous women who will do anything to achieve their goals.

The second book in Vic Robbie's successful Ben Peters series, it continues the fast-paced, action-packed intrigue of In Pursuit Of Platinum and The Girl with the Silver Stiletto, that reviewers praised as 'Brilliant Exciting Suspenseful '

WHAT READERS AND REVIEWERS ARE SAYING

"This is a great storyline with WW2 as a backdrop. It has everything a spy story needs - a hero, a heroine, the Mafia, British Secret Intelligence all against the Nazis. What else could you want?"

"All the ingredients for an absorbing wartime story."

"An action-packed Second World War thriller that fairly rattles along. Finished it in two sessions."

"First time with this author and was interested in his plot development."

"Riveting Action packed non-stop thriller that keeps you turning the pages. Definitely keeps you guessing in what will happen next."

"With lots of characters all playing their parts in a multitude of plot lines, all racing to get to the same "prize" makes for a pulse pounding page turner. Anyone who enjoys reading about the cloak & dagger exploits of agents and counter agents during WWII will certainly be entertained by the players."

"Five stars - Excellent sequel in the series on Nazi Germany for a historical-based fiction novel."

"Another 100 mile-an-hour thriller from Vic Robbie. A great mix of Second World War, Mafia and spies all set on a tropical island, what more could you want "

"You just want to read more and more."

"Five stars - Excellent sequel in the series on Nazi Germany for a historical-based fiction novel.

Vic Robbie's thrillers have been described as 'brilliant, exciting, suspenseful'. He is the author of a WWII historical and espionage series including the bestselling In Pursuit Of Platinum, Paradise Gold and The Girl with the Silver Stiletto. His character Ben Peters has been likened to a reluctant James Bond. He is an international journalist whose work has been published worldwide and has worked for newspapers and magazines in the UK, Australia and the US as a writer, columnist and editor. Apart from playing golf with a passion, but little skill, he has run several marathons including New York and London for charity. Find out more at www.VicRobbie.com