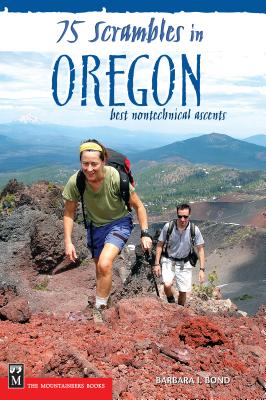 By Barbara I. Bond

* Scramble routes to popular Oregon peaks including Mount Hood, the Sisters, Mount Thielsen, and Mount McLoughlin, as well as lesser-known peaks
* Go off trail safely with the GPS waypoints and contour maps in this guidebook
* Scramble-finder chart for selection of routes according to length, difficulty, season and elevation gain Calling all hikers with a yen for high, lonely places: you can bag that peak if you want to. Scrambling is the bridge between hiking and rock climbing. It involves off-trail travel-making your way over rough terrain and sometimes using your hands for balance and safety on nearly vertical rock-but does not require technical climbing gear. 75 Scrambles in Oregon will take you to some of the same summits that climbers enjoy-but by less extreme routes. These scrambles (short, easy introductory routes and longer, more difficult scrambles) are generously spread across Oregon: the Cascades; Klamath Mountains (SW corner); East Cascades; the Wallowas, Elkhorns, and Blue Mountains (NE); the Strawberry Mountains near John Day; and remote desert ranges (SE corner). Routes are rated for difficulty and skill level. Where nonstandard equipment such as an ice axe, crampons, rope, or helmet are advised, that is noted route by route. Barbara I. Bond is a trip leader for the Mazamas, an outdoor activities and conservation club. She is a professional writer and lives in Portland, Oregon. You can find Barbara on FACEBOOK, or you can visit her web site for more information at OregonScrambles.com.