Please to the Table: The Russian Cookbook (Paperback) 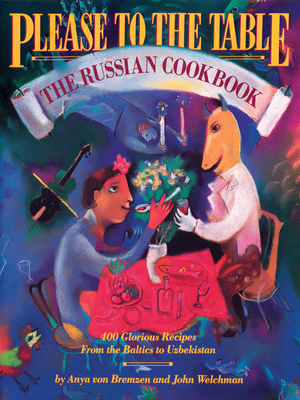 Please to the Table: The Russian Cookbook (Paperback)

PLEASE TO THE TABLE encompasses the exhilarating pleasures of Soviet cooking—of robust Ukranian borschts and classic Russian cuisine, of healthy Georgian grains and yogurts and the delicately perfumed pilafs of Azerbaijan. Its 400 recipes are a revelation.

Anya von Bremzen, a native of Moscow who emigrated to the West in the mid-1070s, is a food writer and food consultant. John Welchman is a travel and food writer who, like Ms. Von Bremzen, specializes in writing about the former Soviet Union. Together they spent three years working on PLEASE TO THE TABLE, traveling extensively through the former USSR, visiting professional chefs, touring markets, and sampling and gathering dishes.

Like most of the culinary world, food and travel writer Anya von Bremzen has Spain on the brain. But unlike those who have recently discovered Spain's sophisticated flavors and innovative charms, Anya has spent the last 10 years writing about Spanish cuisine and culture. A contributing editor at Travel + Leisure, she has pioneered Spanish cuisine in publications like Food & Wine, Departures, Conde Nast Traveler and the LA Times.

In her latest tour de force, The New Spanish Table, Anya reveals the Spain she knows and loves, peppering delicious recipes with historical tidbits, cooking hints and true Spanish hospitality.
In addition to The New Spanish Table, Anya is the author of four ethnic cookbooks, including the James Beard Award-winning Please to the Table: The Russian Cookbook, Terrific Pacific Cookbook, The Greatest Dishes!: Around the World in 80 Recipes, and Fiesta! A Celebration of Latin Hospitality, which won Anya her second Beard award.

When she's not in Spain or traveling to some exotic locale to try a new restaurant, Anya lives in New York City.
John Welchman, who is also the co-author of Please to the Table: The Russian Cookbook, is an art historian and travel writer whose articles have appeared in The New York Times, International Herald Tribune, The Village Voice, The Economist, and Artforum. He is a professor of art history at the University of California, San Diego.