How To Audition On Camera: A Hollywood Insider's Guide for Actors (Paperback) 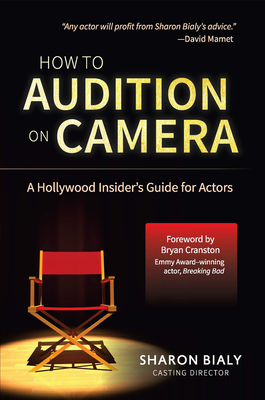 How To Audition On Camera: A Hollywood Insider's Guide for Actors (Paperback)

To win a role in a movie or on network or cable TV, you must make a strong first impression in your brief, crucial audition—and the first person you have to impress is the casting director.

In How to Audition On Camera, Casting Director Sharon Bialy answers the twenty-five questions actors ask most frequently about how to nail an audition. What is the casting director looking for? If you mess up, can you start over? What is the most common mistake experienced actors make? Should you audition off book or can you look at the page? Should you dress in character? How much can you improvise? Actors—both novice and professional—are often misled by myths and outdated prescriptions. This guide replaces such misinformation with concise and accurate advice from someone who is in the room helping to make the decision on who gets the job. Bialy gets readers started immediately on the road to screen acting success.

Sharon Bialy is an award-winning casting director for television, film, and theater. Her television credits include The Walking Dead, Better Call Saul, Halt and Catch Fire, Breaking Bad, Gotham, The Last Tycoon, Flaked, Vice Principals, Phil Spector, The Unit, Jericho, Mind of the Married Man, and Picket Fences. Her film credits include Secret in Their Eyes, Black or White, Drugstore Cowboy, Point Break, Rudy, Mr. Holland’s Opus, Reign O’er Me, and Red Belt. Bialy’s love for theater has been a recurring theme throughout her career. Her Broadway credits include China Doll, The Anarchist, Jersey Boys, Race, and The Farnsworth Invention. Ms. Bialy worked with Des McAnuff at the La Jolla Playhouse for 15 years and various productions at Lincoln Center, The Old Globe, South Coast Rep, and The Guthrie. She has received 15 Artios Award nominations and an Emmy nomination (for Breaking Bad’s final season) and a member of The Academy, and a former board member of the Casting Society of America.

Bryan Cranston is an Emmy Award – winning actor, Breaking Bad
While acting is an art, auditioning is a craft—and Sharon knows this world six ways to Sunday. Her book brims with no-nonsense advice and tough love.
— Vince Gilligan, creator of Breaking Bad

I wish I’d had this advice when I started out.
— Bryan Cranston, Emmy Award- winning actor, Breaking Bad

Any actor will profit from Sharon Bialy’s advice, and, should they bring this book to any audition she and I are running, will surely get not only our attention, but our respect.
— David Mamet, Pulitzer Prize – winning playwright, Glengarry Glen Ross