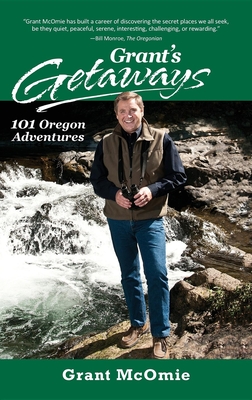 "Grant has long been a favorite of mine and now he's sharing the how, what, where, and when of his insightful outdoor adventures. Whether tree climbing, cooking up a crawfish boil, digging clams and fossils, kayaking, snowshoeing, or soaring skyward, Grant offers 101 concise vignettes that intrigue and encourage us to lace up our boots and get out there. As Grant so aptly puts, 'Why live here if you don't go searching for those singular moments which set Oregon apart.' Amen." --MJ Cody, co-editor of Wild in the City

Emmy Award-winning journalist and fifth-generation Oregon native Grant McOmie provides travelers with an in-depth guide to 101 of the best Oregon destinations featured in his popular television series Grant's Getaways, produced by KGW-TV and Travel Oregon. Come along with Grant McOmie as he explores family-friendly destinations and day trips across the width and breadth of Oregon.

From kayaking in Netarts Bay, riding a jet boat on the Rogue River, and fishing for Deschutes River steelhead to exploring Lava River Cave in the Newberry Volcanic National Monument, digging for fossils in the John Day Basin, and riding mountain bikes at Black Rock, Grant's Getaways: 101 Oregon Adventures has an outdoor adventure for everyone.

The book is organized by the month in which the television segment was filmed, and features 75 photographs from Grant's outdoor adventures. Also included are travel tips such as "What to Know if You Go" and "Best Time of the Year" as well as access information.

Grant McOmie is a Pacific Northwest journalist, author, and teacher who writes and produces stories and special programs about the people, places, outdoor activities, and environmental issues of the Pacific Northwest. A fifth-generation Oregon native, Grant is a graduate of Pacific University in Forest Grove, Oregon, and he continued graduate studies in Journalism, English and Speech Communications at the University of Washington and the University of Portland (Master of Arts).

Grant began his broadcast career at Portland's KGW-TV in 1981, and then worked at other stations in Seattle and Portland. He returned to KGW in 2008. He currently stars in the ongoing series "Grant's Getaways" for KGW-TV and Travel Oregon. While he has had a varied career reporting and producing topical and timely environmental news stories, features and documentary programs, it's been the exploration of the Pacific Northwest back roads and byways that he has enjoyed the most. Sharing those journeys of discovery with readers and viewers has provided the greatest personal rewards and the dominant themes in his work.

Grant has received significant awards for his work, including numerous Emmy Awards from the National Academy of Television Arts, most recently a 2011-12 Emmy for Feature Reporting. He shares the distinct honor of the Edward R. Murrow Award for News Coverage from the Radio-Television News Directors Association, as well as many Oregon AP and OAB News Awards over the past three decades.