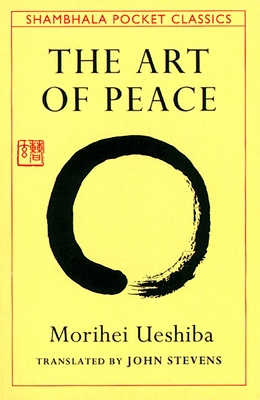 These inspirational teachings show that the real way of the warrior is based on compassion, wisdom, fearlessness, and love of nature. Drawn from the talks and writings of Morihei Ueshiba, founder of the popular Japanese martial art known as Aikido, The Art of Peace, presented here in a pocket-sized edition, offers a nonviolent way to victory and a convincing counterpoint to such classics as Musashi's Book of Five Rings and Sun Tzu's Art of War.
Morihei Ueshiba (1883–1969) was the founder of Aikido. At age eighteen, Ueshiba joined the Japanese military, during which time he also developed his skills in the martial arts. He eventually left the military, deeply discouraged by the death and destruction that results from combat. Ueshiba continued to experiment with a variety of martial arts, finding particular joy in the spiritual aspects of martial arts. He came to believe that a real warrior was one who was rooted in love, and it was in this spirit that he began to develop Aikido, a martial art that emphasizes harmony and the peaceful resolution of conflict.

“This small, elegant book is filled with the wisdom and artistry of a great man. This collection of Morihei Ueshiba’s sayings and poetry resonates with deep meaning, making this a gem of a book. The book itself is of very high quality—compact and well-bound, with clear print and beautifully reproduced images of Ueshiba’s calligraphy. A CD of the book, read in a clear, calm voice, is also a very nice inclusion. It is an important collection for the reflective artist, and practically applicable to those intent on living a grounded, sensitive life.”—Journal of Asian Martial Arts