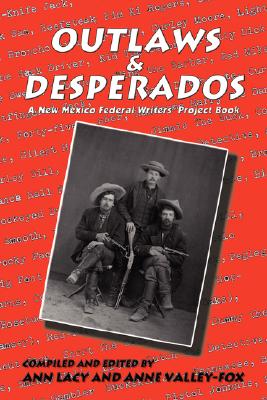 In the early days of the American West, outlaws dominated the New Mexico Territory. Such colorful characters as Black Jack Ketchum, the Apache Kid, Curly Bill, Devil Dick, Billy the Kid, Bill McGinnis, Vicente Silva and his gang, the Dalton Brothers, and the Wild Bunch terrorized the land. Feared by many, loved by some, their exploits were both horrifying and legendary. In between forays, notorious outlaws were sometimes exemplary cowboys. Singly or in gangs, they held up stagecoaches and trains and stole from prospectors and settlers. When outlaws reigned, bank holdups, shoot-outs, and murders were a common occurrence; death by hanging became a favored means of settling disputes by outlaws and vigilantes alike. Stories of outlaws later provided plots for many of our favorite Western movies. Between 1936 and 1940, field workers in the Federal Writers' Project (a part of the government-funded Works Progress Administration, or WPA, later called Work Projects Administration) collected and wrote down many accounts that provide an authentic and vivid picture of outlaws in the early days of New Mexico. They feature life history narratives of places, characters, and events of the Wild West during the late 1800s. These original documents reflect the unruly, eccentric conditions of the New Mexico Territory as they played out in clashes and collaborations between outlaws and "the gentle people" of New Mexico before and after statehood. This book, focusing on outlaws and desperados, is the first in a series featuring stories from the New Mexico Federal Writers' Project collection. Other books in the series include stories about ranchers, cowboys, and the wild and woolly adventures of sheepherders, homesteaders, prospectors, and treasure hunters. In them, the untamed New Mexico Territory comes to life with descriptions of encounters with Indians, travels along the old trails, cattle rustling, murders at the gambling table, and Pancho Villa's raid on Columbus. This treasury of Federal Writers' Project records, presented with informative background and historic photographs, also highlights Hispano folk life and Western lore in old New Mexico.