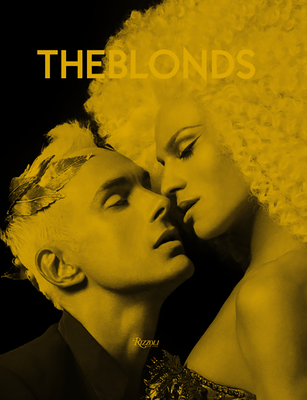 The Blonds is an invitation to designer Phillipe Blond and creative director David Blond’s inclusive, wild, and high-octane world. Since 2006, The Blonds have catered to the entertainment industry with glamor-usly over-the-top designs. Celebrities rely on the duo’s intricate corsets, catsuits, and dresses for performances, award shows, editorials, and any other special occasion where they need to move and shine.

Their first book, as riotous as the brand’s legendary New York Fashion Week shows, unfolds in several acts, starting with an introduction to Phillipe and David, detailing their inspirations and how they built their rebellious brand over the last two decades. A chapter on their legendary runway shows includes details of their most iconic looks. The centerpiece showcases editorial and stage photography of celebrities, surrounded by anecdotes from the stars about their performances, life on stage, and their love of The Blonds. Including an in-depth look at the duo’s high-profile partnerships, runway shows, and the craftsmanship behind each piece, The Blonds is a backstage pass from sketch to stadium.
David and Phillipe Blond met when they were young, hungry New York creatives who, like many, were enchanted by the city and its nightlife. The meeting of David and Phillipe led to an ever-growing alternative fashion house that merges their mutual interests into handmade clothes fit for their private clients and rock stars alike.
"Step inside the mega-watt, high-octane world of The Blonds. Designer/creative director duo and NYFW mainstays Phillipe and David Blond are set to release their first fashion book this September with Rizzoli. Titled THE BLONDS: GLAMOUR, FASHION, FANTASY, the tome features contributions from some of the industry’s most unique and daring style stars such as Daphne Guinness, Billy Porter, and Paris Hilton, while images of Miley Cyrus, Katy Perry, Lil Kim, Mariah Carey, Jennifer Lopez, Rihanna, Madonna, and more grace the pages in their standout looks by the NYC-based label. In the words of Guinness: 'Great designers can change the way we look at ourselves, and thus our very culture. The Blonds are a soaring example of this. They are pioneers.'" —DAILY FRONT ROW