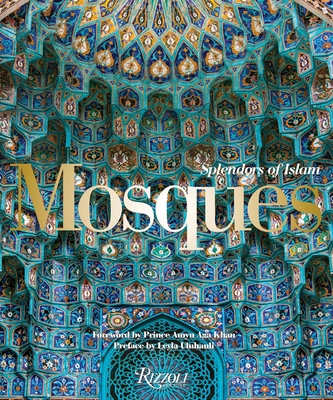 One of the most important and authoritative books to celebrate mosque architecture and Islamic design, featuring many exquisite newly commissioned photographs.

Mosques from Europe, the Indian subcontinent, North America, North Africa and the sub-Sahara, the Middle East, and Russia and the Caucasus are showcased. This book covers their earliest origins in Mecca and Medina to contemporary masterpieces, illuminating their stylistic transformations and providing examples from Islam’s great dynasties—the Umayyads, the Abbasids, the Mamluks, the Ottomans, the Safavids, and the Mughals.

Original and archival photographs offer exterior and interior views along with images of adjacent gardens and fountains that grace these sanctuaries. Stunning mosque calligraphy and tilework, as well as furnishings and illumination, enhance this volume.
Author Leyla Uluhanli is a prominent interior designer based in Moscow. She was born and raised in Baku, Azerbaijan, and mosque architecture has played a definitive role in her approach to design. Since 2005, her company Leyla Uluhanli Interiors has worked on numerous projects in Russia and abroad. In 2015, she launched the Leyla Uluhanli Collection of Home Furnishings.

Prince Amyn Aga Khan is a member of the board of the Aga Khan Trust for Culture, which is active in architectural conservation.