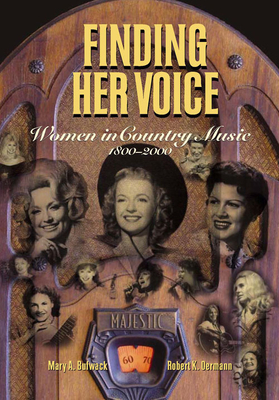 
Usually Ships in 1-5 Days
After its initial publication in 1993, Mary A. Bufwack and Robert K. Oermann's Finding Her Voice: The Saga of Women in Country Music quickly became an essential book for country music scholars and fans. Now back in print, with updated material, an additional chapter, and new photos, Finding Her Voice is poised to reach a whole new generation of country music fans.

From country's earliest pioneers to its greatest legends, Finding Her Voice documents the lives of the female artists who have shaped the music for over two hundred years. Through interviews, photos, and primary texts, Bufwack and Oermann weave a vast and complex tapestry of personalities and talent. Long overlooked and underappreciated by scholars, female country music artists have always been immensely popular with fans. This book gets to the heart of the special bond female artists have with their audiences. People seeking to understand the context out of which mega-stars such as Shania Twain, Faith Hill, and the Dixie Chicks emerged need look no farther than this book.

Co-published with the Country Music Foundation Press
Mary A. Bufwack is a cultural anthropologist who specializes in women's studies. Robert K. Oermann is a music journalist whose honors include the Country Music Association's Media Achievement Award.