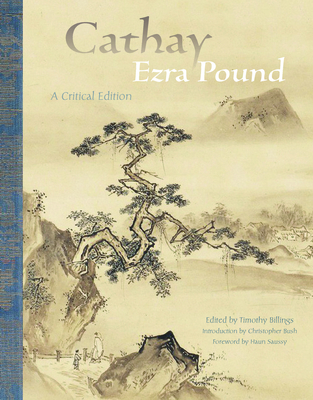 Ezra Pound's Cathay (1915) is a masterpiece both of modernism and of world literature. The muscular precision of images that mark Pound's translations helped establish a modern style for American literature, at the same time creating a thirst for classical Chinese poetry in English. Pound's dynamic free-verse translations in a modern idiom formed the basis for T.S. Eliot's famous claim that Pound was the "inventor of Chinese poetry for our time." Yet Pound achieved this feat without knowing any Chinese, relying instead on word-for-word "cribs" left by the Orientalist Ernest Fenollosa, whose notebooks reveal a remarkable story of sustained cultural exchange. This fully annotated critical edition focuses on Pound's astonishing translations without forgetting that the original Chinese poems are masterpieces in their own right. On the one hand, the presentation of all that went into the final Cathay makes it possible for the first time to appreciate the magnitude and the nuances of Pound's poetic art. At the same time, by bringing the final text together with the Chinese and Old English poems it claims to translate, as well as the manuscript traces of Pound's Japanese and American interlocutors, the volume also recovers practices of poetic circulation, resituating a Modernist classic as a work of world literature. The Pound text and its intertexts are presented with care, clarity, and visual elegance. By providing the first accurate and unabridged transcriptions of Fenollosa's notebooks, along with carefully edited Chinese texts, the volume makes it possible to trace the movements of poetic ideas and poetic expression as they veer toward and away from Pound's creations. In supplying the full Fenollosa texts, the volume overturns decades of scholarship that has mystified Pound's translation process as a kind of "clairvoyance," displaying instead the impressive amount of sinological learning preserved in Fenollosa's hard-to-read notebooks and by detailing every deviation from the probable sense of the originals. The edition also supplies exhaustive historical, critical, and textual notes, clarifying points that have sometimes lent obscurity to Pound's poems and making the process of translation visible even for readers with no knowledge of Chinese. Cathay: A Critical Edition includes the original fourteen Chinese translations as well as Pound's unique version of "The Seafarer," which is fully annotated alongside its Anglo-Saxon source. Also included are Pound's fifteen additional Chinese translations from Lustra and other contemporary publications, his essay "Chinese Poetry" (1919), a substantial textual Introduction, and original essays by Christopher Bush and Haun Saussy on international modernism, the mediation of Japan, and translation. The meticulous treatment and analysis of the texts for this landmark edition will forever change how readers view Pound's "Chinese" poems. In addition to discoveries that permanently alter the scholarly record and force us to revise a number of critical commonplaces, the critical apparatus allows readers to make fresh discoveries by making available the specific networks through which poetic expression moved among hands, languages, and media. Ultimately, this edition not only enables us more fully to appreciate a canonical work of Modernism but also resituates the art of Pound's translations by recovering the historical circulations that went into the making of a multiply authored and intrinsically hybrid masterpiece.