The Beginning of Heaven and Earth Has No Name: Seven Days with Second-Order Cybernetics (Meaning Systems) (Hardcover) 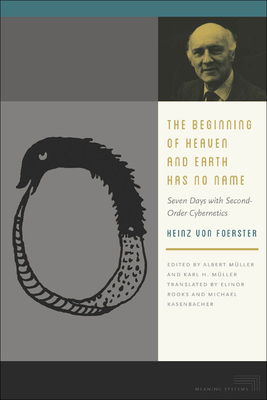 The Beginning of Heaven and Earth Has No Name: Seven Days with Second-Order Cybernetics (Meaning Systems) (Hardcover)

Heinz von Foerster was the inventor of second-order cybernetics, which recognizes the investigator as part of the system he is investigating. The Beginning of Heaven and Earth Has No Name provides an accessible, nonmathematical, and comprehensive overview of von Foerster's cybernetic ideas and of the philosophy latent within them. It distills concepts scattered across the lifework of this scientific polymath and influential interdisciplinarian. At the same time, as a book-length interview, it does justice to von Foerster's lan as a speaker and improviser, his skill as a raconteur.

Developed from a week-long conversation between the editors and von Foerster near the end of his life, this work playfully engages von Foerster in developing the difference his notion of second-order cybernetics makes for topics ranging from emergence, life, order, and thermodynamics to observation, recursion, cognition, perception, memory, and communication. The book gives an English-speaking audience a new ease of access to the rich thought and generous spirit of this remarkable and protean thinker.
Heinz von Foerster (Author) Heinz von Foerster is one of the most consequential thinkers in the history of cybernetics. Von Foerster wrote nearly two hundred professional papers, gaining renown in fields from computer science and artificial intelligence to epistemology and family therapy. Elinor Rooks (Translator) Elinor Rooks is a doctoral student at the University of Leeds. Michael Kasenbacher (Translator) Michael Kasenbacher is a social scientist and translator.