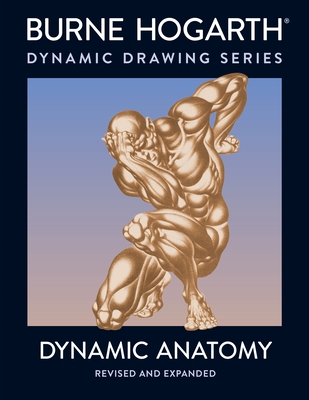 
Usually Ships in 1-5 Days
Praised by critics and teachers alike for more than 40 years, Burne Hogarth’s Dynamic Anatomy is recognized worldwide as the classic, indispensable text on artistic anatomy. Now revised, expanded, and completely redesigned with 75 never-before-published drawings from the Hogarth archives and 24 pages of new material, this award-winning reference explores the expressive structure of the human form from the artist’s point of view.

The 400 remarkable illustrations explain the anatomical details of male and female figures in motion and at rest, always stressing the human form in space. Meticulous diagrams and fascinating action studies examine the rhythmic relationship of muscles and their effect upon surface forms. The captivating text is further enhanced by the magnificent figure drawings of such masters as Michelangelo, Rembrandt, Rodin, Picasso, and other great artists.

Dynamic Anatomy presents a comprehensive, detailed study of the human figure as artistic anatomy. This time-honored book goes far beyond the factual elements of anatomy, providing generations of new artists with the tools they need to make the human figure come alive on paper.

BURNE HOGARTH (1911–1996), hailed as the “Michaelangelo of the comic strip,” was one of the most iconic cartoonists and influential arts educators of the twentieth century and remains so today. After attending the Chicago Art Institute and Academy of Fine Arts at the age of fifteen, Hogarth began an illustrious career in arts education, fine arts, illustration, advertising, and comics, and became recognized as one of the earliest creators of the graphic novel. Best known for his innovative illustrations of the syndicated Sunday Tarzan, Hogarth broke fresh ground in the newspaper comic strip by combining classicism, expressionism, and narrative in
a powerful, new way.

As cofounder of the School of Visual Arts—one of the world’s leading art schools—he brought his unique approach to art into the classroom. His passionate lectures on anatomy and art history formed the foundation for The Burne Hogarth® Dynamic Drawing Series that continues to teach and influence artists and animators worldwide.

Hogarth’s art has been exhibited in many important galleries around the world including the Louvre in the Museé des Arts Décoratifs and Marseilles’ Bibliothèque. He traveled the world throughout his life receiving numerous international awards and accolades.