I the People: The Rhetoric of Conservative Populism in the United States (Rhetoric, Culture, and Social Critique) (Hardcover) 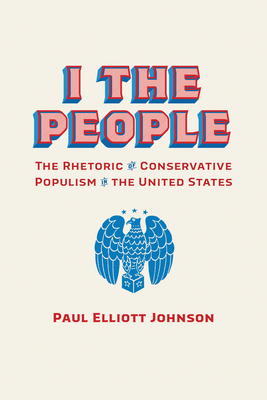 I the People: The Rhetoric of Conservative Populism in the United States (Rhetoric, Culture, and Social Critique) (Hardcover)

I The People: The Rhetoric of Conservative Populism in the United States examines a variety of texts—ranging from speeches and campaign advertisements to news reports and political pamphlets—to outline the populist character of conservatism in the United States. Paul Elliott Johnson focuses on key inflection points in the development of populist conservatism, including its manifestation in the racially charged presidential election of 1964, its consolidation at the height of Ronald Reagan’s reelection campaign in 1984, and its character in successive moments that saw its fortunes wax and wane, including 1994, the Obama era, and the rise of Donald J. Trump. theorizing conservative populism as a rhetorical form, Johnson advances scholarship about populism away from a binary ideological framework while offering a useful lens for contextualizing scholarship on American conservatism. I The People emphasizes that the populist roots of conservative hegemony exercise a powerful constraining force on conservative intellectuals, whose power to shape and control the movement to which they belong is circumscribed by the form of its public-facing appeals.

The study also reframes scholarly understandings of the conservative tradition’s seeming multiplicity, especially the tendency to suggest an abiding conservative unease regarding capitalism, showing how racist hostility underwrote a compromise with an increasingly economized understanding of humanity. Johnson also contests the narrative that conservatives learned to practice identity politics from social progressives. From the beginning, conservatism’s public vernacular was a white and masculine identity politics reliant on a rhetoric of victimhood, whether critiquing the liberal Cold War consensus or President Barack Obama.

Paul Elliott Johnson is assistant professor of deliberation and public life in the Department of Communication at the University of Pittsburgh. His scholarship has appeared in Women’s Studies in Communication, Critical Studies in Media Communication, and Argumentation and Advocacy.

“Paul Johnson’s I The People offers a theoretically rich lens for understanding the paradoxes of modern conservative rhetoric, drawing together rhetorical, psychoanalytic, and political theory. Johnson attends astutely to the interarticulation of toxic white masculinity and conservative populism in the United States, offering insights into both contemporary iterations of political culture and to their historical antecedents.”
—Claire Sisco King, author of Washed in Blood: Male Sacrifice, Trauma, and the Cinema