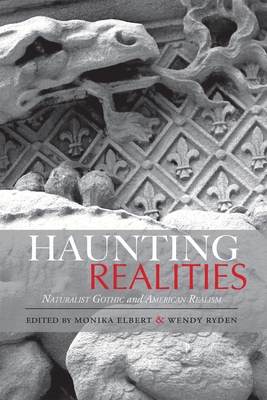 Following the golden age of British Gothic in the late eighteenth century, the American Gothic’s pinnacle is often recognized as having taken place during the decades of American Romanticism. However, Haunting Realities explores the period of American Realism—the end of the nineteenth century—to discover evidence of fertile ground for another age of Gothic proliferation.

At first glance, “Naturalist Gothic” seems to be a contradiction in terms. While the Gothic is known for its sensational effects, with its emphasis on horror and the supernatural, the doctrines of late nineteenth-century Naturalism attempted to move away from the aesthetics of sentimentality and stressed sobering, mechanistic views of reality steeped in scientific thought and the determinism of market values and biology. Nonetheless, what binds Gothicism and Naturalism together is a vision of shared pessimism and the perception of a fearful, lingering presence that ominously haunts an impending modernity. Indeed, it seems that in many Naturalist works reality is so horrific that it can only be depicted through Gothic tropes that prefigure the alienation and despair of modernism.

In recent years, research on the Gothic has flourished, yet there has been no extensive study of the links between the Gothic and Naturalism, particularly those which stem from the early American Realist tradition. Haunting Realities is a timely volume that addresses this gap and is an important addition to scholarly work on both the Gothic and Naturalism in the American literary tradition.
Monika Elbert is a professor of English at Montclair State University and coeditor of Romantic Education in Nineteenth-Century American Literature: National and Transatlantic Contexts and Transnational Gothic: Literary and Social Exchanges in the Long Nineteenth Century.

Wendy Ryden is an associate professor of English at Long Island University Post and coauthor of Reading, Writing, and the Rhetorics of Whiteness.

“This wide-ranging, thoughtfully curated collection of essays examines late-19th-century American writing in the naturalist mode that contains gothic elements. Though not all readers will be interested in all the essays, each essay has a unique perspective on the book’s themes. This collection will appeal particularly to specialists, but those enthusiastic about the influence of gothic literature may also find it worthwhile. Recommended.”
—CHOICE

“For those of us who remain haunted by the perspicacity and terror informing late nineteenth-century American literature, Haunting Realities is an important book about cultural crisis, then and now.”
—Studies in American Naturalism

“Haunting Realities is an interesting and compelling collection that offers a new and fascinating perspective on the influence of the Gothic on Naturalist texts.”
—Keith Newlin, author of Hamlin Garland: A Life and editor of The Oxford Handbook of American Literary Naturalism

“No book before Haunting Realities has explored the relationship between the Gothic and the modes of Realism and Naturalism, which are apparently antithetical to it. Yet, in the central paradox identified by Elbert and Ryden, Gothic tropes are everywhere in the literature of the post–Civil War period, and reveal much about the age’s crisis of faith in progress—and about our own times as well. This is a wide-ranging and thoughtful collection and will be studied by anyone interested in the Gothic and the literature of the United States.”
—Charles L. Crow, author of History of the Gothic: American Gothic and editor of American Gothic: An Anthology, 1787–1916