Learning to Govern: An Institutional View of the 104th Congress (Paperback) 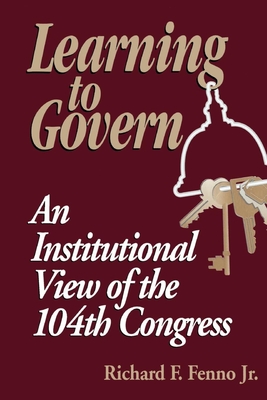 Learning to Govern: An Institutional View of the 104th Congress (Paperback)

The elections of 1994 produced the first Republican-controlled Congress in 40 years. What effect did being the minority party for so long have on the activities of the new House of Representatives' majority? In this book, Richard Fenno makes the case that four decades out of power left Republicans without the experience they needed to properly interpret their electoral victory... or govern the country.

This inexperience produced serious consequences for the party and the American political system, including the confrontational leadership of Newt Gingrich, the deterioration of cross-party civility, the general support for term limits, and an accelerated loss of public confidence in Congress.

And there was more. Although all the evidence pointed to voters' repudiation of the Democrats, the Republicans saw their victory as a mandate for wholesale change--a Republican Revolution. Instead of trying to make careful, incremental changes, their inexperience and aggressive ""let's get it all, and let's get it now"" tactics cost them their golden opportunity and cleared the way for the reelection of President Clinton.

This book provides a timely focus on the attitudes and agendas of the inexperienced Republican freshman class and its contribution to the problem-plagued attempts to use the election campaign Contract with America as a blueprint for governing.

Richard F. Fenno Jr. is professor of political science at the University of Rochester. He is the author of numerous books, including most recently Senators on the Campaign Trail: The Politics of Representation (Oklahoma, 1996).