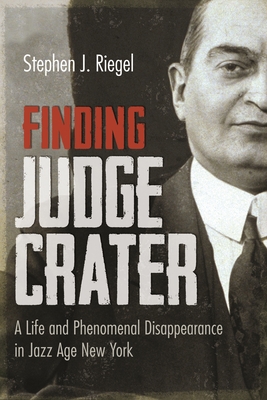 On the night of August 6, 1930, Joseph Force Crater, a newly appointed judge and prominent figure in many circles of Manhattan, hailed a taxi in the heart of Broadway and vanished into thin air. Despite a decades-long international manhunt led by the New York Police Department's esteemed Missing Persons Bureau, the reason for Crater's disappearance remains a confounding mystery. In the early months of the investigation, evidence implicated and imperiled New York's top officials, including then-Governor Franklin D. Roosevelt and Mayor Jimmy Walker, as well as the city's Tammany Hall political machine, lawyers and judges, and a theater mogul.

Drawing on new sources, including NYPD case files and court records, and overlooked evidence discovered years later, Riegel pieces together the puzzle of what likely happened to Joseph Crater and why. To uncover the mystery, he delves into Crater's ascension into the scintillating and corrupt world of Manhattan in the Roaring Twenties and Jazz Age. In turn, the story of the judge's vanishing amid the Great Depression unfolds as a harbinger of the disappearance of his lost metropolis and its transformation into modern-day New York City.
Stephen J. Riegel is a practicing litigator and former federal prosecutor in New York City who appears in some of the same courts Crater did. He also has degrees in American history from Princeton University and Stanford University. He has published articles on legal history.