Sex Is as Sex Does: Governing Transgender Identity (Hardcover) 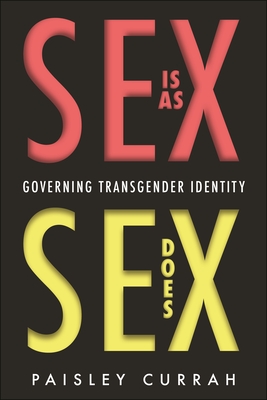 Sex Is as Sex Does: Governing Transgender Identity (Hardcover)

What the evolving fight for transgender rights reveals about government power, regulations, and the law

Every government agency in the United States, from Homeland Security to Departments of Motor Vehicles, has the authority to make its own rules for sex classification. Many transgender people find themselves in the bizarre situation of having different sex classifications on different documents. Whether you can change your legal sex to "F" or "M" (or more recently "X") depends on what state you live in, what jurisdiction you were born in, and what government agency you're dealing with. In Sex Is as Sex Does, noted transgender advocate and scholar Paisley Currah explores this deeply flawed system, showing why it fails transgender and non-binary people. Providing examples from different states, government agencies, and court cases, Currah explains how transgender people struggle to navigate this confusing and contradictory web of legal rules, definitions, and classifications. Unlike most gender scholars, who are concerned with what the concepts of sex and gender really mean, Currah is more interested in what the category of "sex" does for governments. What does "sex" do on our driver's licenses, in how we play sports, in how we access health care, or in the bathroom we use? Why do prisons have very different rules than social service agencies? Why is there such resistance to people changing their sex designation? Or to dropping it from identity documents altogether? In this thought-provoking and original volume, Sex Is as Sex Does reveals the hidden logics that have governed sex classification policies in the United States and shows what the regulation of transgender identity can tell us about society's approach to sex and gender writ large.Ultimately, Currah demonstrates that, because the difficulties transgender people face are not just the result of transphobia but also stem from larger injustices, an identity-based transgender rights movement will not, by itself, be up to the task of resolving them.