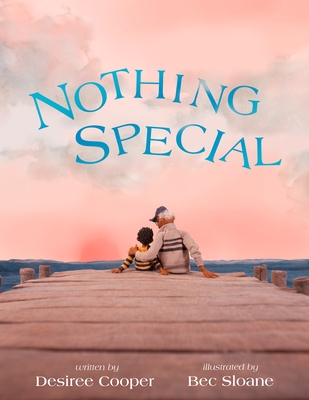 Selected as a Top Ten Children's Book of 2022 by the New York Public Library; and a selection of Social Justice Books (a Teach for Change project)

A buddy story that spans generations, and a love letter to the Black family connections that survive the Great Migration.

Six-year-old Jax can't wait to leave Detroit and spend a week with his grandparents in coastal Virginia, where he's sure he'll be spoiled with the kinds of special things he enjoys at home: toys, movies, and hamburgers. As he dreams of the adventures he'll have, his PopPop has other ideas. He fills their days with timeless summer fun-crabbing, shucking corn, and counting fireflies. Illustrated entirely of repurposed textiles, Nothing Special celebrates the enduring connection between the generations who stayed in the South and the millions of emigrants for whom it will always be home. Between 1910 and 1970, more than six million African Americans left the Jim Crow South, but they never forgot the culture, the land, and the family they left behind. In the decades since, it has become a summer ritual for many black families to reverse the journey and return South for a visit to their homeplaces.
Desiree Cooper is a 2015 Kresge Artist Fellow, award-winning journalist, and community activist. She is a widely published essayist and the author of Know the Mother (Wayne State University Press). She is raising her three grandchildren in coastal Virginia. Bec Sloane is an educator, production designer, and animator working primarily in textiles and tactile media. She writes for various publications, bridging awareness gaps and encouraging cross-sector collaboration with a focus in agroecology and immigrant justice.