The Constitutional Convention: A Narrative History from the Notes of James Madison (Modern Library Classics) (Paperback) 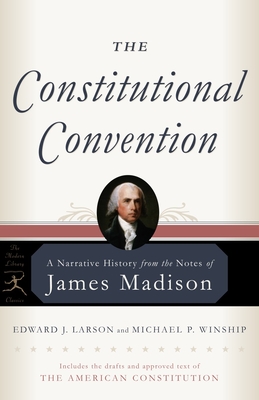 The Constitutional Convention: A Narrative History from the Notes of James Madison (Modern Library Classics) (Paperback)


Usually Ships in 1-5 Days
In 1787, the American union was in disarray. The incompatible demands of the separate states threatened its existence; some states were even in danger of turning into the kind of tyranny they had so recently deposed. A truly national government was needed, one that could raise money, regulate commerce, and defend the states against foreign threats–without becoming as overbearing as England. So thirty-six-year-old James Madison believed. That summer, the Virginian was instrumental in organizing the Constitutional Convention, in which one of the world’s greatest documents would be debated, created, and signed. Inspired by a sense of history in the making, he kept the most extensive notes of any attendee.Now two esteemed scholars have made these minutes accessible to everyone. Presented with modern punctuation and spelling, judicious cuts, and helpful notes–plus fascinating background information on every delegate and an overview of the tumultuous times–here is the great drama of how the Constitution came to be, from the opening statements to the final votes. This Modern Library Paperback Classic also includes an Introduction and appendices from the authors.
Edward J. Larson is Russell Professor of History and Talmadge Professor of Law at the University of Georgia. He received the 1998 Pulitzer Prize for his book Summer for the Gods. His most recent book is Evolution: The Remarkable History of the Scientific Theory, published by Modern Library.
Michael Winship, a specialist in early American history, is professor of history at the University of Georgia. He is the author of numerous books and articles.