Color: A Natural History of the Palette (Paperback) 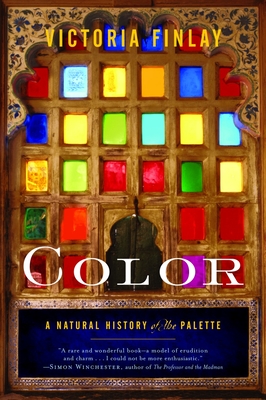 Color: A Natural History of the Palette (Paperback)


Email or call for price
In this vivid and captivating journey through the colors of an artist’s palette, Victoria Finlay takes us on an enthralling adventure around the world and through the ages, illuminating how the colors we choose to value have determined the history of culture itself.

How did the most precious color blue travel all the way from remote lapis mines in Afghanistan to Michelangelo’s brush? What is the connection between brown paint and ancient Egyptian mummies? Why did Robin Hood wear Lincoln green? In Color, Finlay explores the physical materials that color our world, such as precious minerals and insect blood, as well as the social and political meanings that color has carried through time.

Roman emperors used to wear togas dyed with a purple color that was made from an odorous Lebanese shellfish–which probably meant their scent preceded them. In the eighteenth century, black dye was called logwood and grew along the Spanish Main. Some of the first indigo plantations were started in America, amazingly enough, by a seventeen-year-old girl named Eliza. And the popular van Gogh painting White Roses at Washington’s National Gallery had to be renamed after a researcher discovered that the flowers were originally done in a pink paint that had faded nearly a century ago. Color is full of extraordinary people, events, and anecdotes–painted all the more dazzling by Finlay’s engaging style.

Embark upon a thrilling adventure with this intrepid journalist as she travels on a donkey along ancient silk trade routes; with the Phoenicians sailing the Mediterranean in search of a special purple shell that garners wealth, sustenance, and prestige; with modern Chilean farmers breeding and bleeding insects for their viscous red blood. The colors that craft our world have never looked so bright.
A British citizen living in Hong Kong, Victoria Finlay has worked for Reuters and was the arts editor for the South China Morning Post for four and a half years before leaving to write this book. She writes regularly about arts and travel for Hong Kong newspapers and international media.
“This is a rare and wonderful book–a model of erudition and charm, the writing elegant and precise, and with at least one new and fascinating revelation on every single page. I could not be more enthusiastic.”—Simon Winchester, author of The Professor and the Madman

“Until I read this book, I was colorblind.”—Cynthia Rowley

"Color is the essence of landscape, of mood, of our whole perception of the physical world. Victoria Finlay has traveled through Iran, Afghanistan, and other places to investigate the origin of all those tantalizingly sensual ochers and reds and blues. What a creative idea for a book!”—Robert D. Kaplan, author of The Ends of the Earth and Eastward to Tartary

"In this engaging travelogue, a rainbow of hues determined the author’s choice of destinations. . . . By the time you read ‘Violet,’ you will have traversed much of the world, sharing Finlay’s contagious fascination with color.”—Condé Nast Traveler

"Loaded with fascinating tidbits, this portrait of colors and their histories will provide readers with lots of conversation-starters.”—Boston Herald