The Memoirs of Catherine the Great (Modern Library Classics) (Paperback) 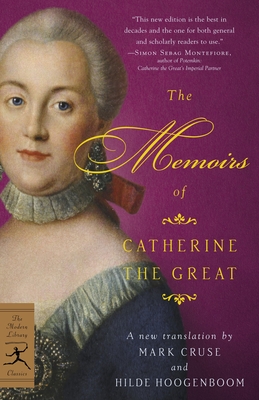 The Memoirs of Catherine the Great (Modern Library Classics) (Paperback)


Email or call for price
Empress Catherine II brought Europe to Russia, and Russia to Europe, during her long and eventful reign (1762—96). She fostered the culture of the Enlightenment and greatly expanded the immense empire created by Czar Ivan the Terrible, shifting the balance of power in Europe eastward. Famous for her will to power and for her dozen lovers, Catherine was also a prolific and gifted writer.

Fluent in French, Russian, and German, Catherine published political theory, journalism, comedies, operas, and history, while writing thousands of letters as she corresponded with Voltaire and other public figures. The Memoirs of Catherine the Great provides an unparalleled window into eighteenth-century Russia and the mind of an absolute ruler.

With insight, humor, and candor, Catherine presents her eyewitness account of history, from her whirlwind entry into the Russian court in 1744 at age fourteen as the intended bride of Empress Elizabeth I’s nephew, the eccentric drunkard and future Peter III, to her unhappy marriage; from her two children, several miscarriages, and her and Peter’s numerous affairs to the political maneuvering that enabled Catherine to seize the throne from him in 1762. Catherine’s eye for telling details makes for compelling reading as she describes the dramatic fall and rise of her political fortunes.

This definitive new translation from the French is scrupulously faithful to her words and is the first for which translators have consulted original manuscripts written in Catherine’s own hand. It is an indispensable work for anyone interested in Catherine the Great, Russian history, or the eighteenth century.
About the Translators

Mark Cruse has a Ph.D. in French literature from New York University and teaches at Arizona State University.

Hilde Hoogenboom received her Ph.D. in Russian literature from Columbia University and teaches Russian and translation at the State University of New York at Albany.
Advance praise for The Memoirs of Catherine the Great

“Superb. The translation of the Memoirs is fluid, accessible, and idiomatic, while remaining accurate and as delightful as the original. Students will heartily enjoy this excursion into the historical and literary world of the great empress.”
–Cynthia Hyla Whittaker, professor and chair, Department of History, Baruch College/CUNY

“Several translations of the memoirs of Catherine the Great have been published before, but none of them can compare with this latest edition. Mark Cruse and Hilde Hoogenboom have produced a masterpiece. Their translation fairly sings, capturing with stunning virtuosity all the beguiling wit and charm that make these memoirs one of the most fascinating works ever penned by a European monarch.”
–Douglas Smith, editor and translator of Love and Conquest: Personal Correspondence of Catherine the Great and Prince Grigory Potemkin

“Catherine the Great’s memoirs are a classic and almost unique record of personality and power, the work of one of history’s greatest and most alluring leaders but also of a young girl trapped in a sinister court and a miserable marriage–this new edition is the best for decades and the one for both general and scholarly readers to use.”
–Simon Sebag Montefiore, author of Potemkin: Catherine the Great’s Imperial Partner and Stalin: The Court of the Red Tsar

“A richly textured account of the turbulent years the young Grand Duchess spent at the court of the Empress Elizabeth. No serious student of Catherine’s life and reign will want to be without this splendid new edition. It casts a completely new light on the composition of the Empress’s extraordinary memoirs.”
–Professor Simon M. Dixon, chairman, School of History, University of Leeds

“Catherine’s memoirs are one of the most fascinating documents of the eighteenth century. This translation will give the English-speaking audience a unique chance to learn about the life of this extraordinary woman from her own story.”
–Professor Alexandr Kamenskii, chair, Early and Early Modern Russian History, The Russian State University for the Humanities

“This fluent and unabridged translation of one of the most remarkable documents of eighteenth-century history, based on the original French manuscript of the text that Catherine revised in 1794, is preceded by a substantial scholarly preface tracing the fascinating story of the memoirs’ composition, sources, literary style, and fate after Catherine’s death. Researchers, teachers, and general readers alike will welcome this book.”
–Lindsey Hughes, University College London