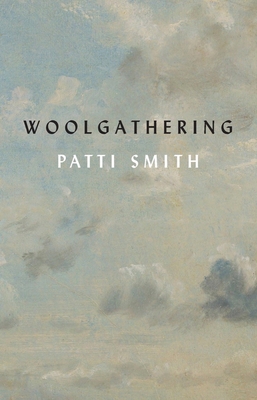 The National Book Award–winner Patti Smith updates her treasure box of a childhood memoir about “clear unspeakable joy” and “just the wish to know” with a radiant new afterword, written during the pandemic and reflecting on current times. This expanded paperback edition also includes new photographs by the author.

A great book about becoming an artist, Woolgathering tells of a child finding herself as she learns the noble vocation of woolgathering, “a worthy calling that seemed a good job for me.” She discovers—often at night, often in nature—the pleasures of rescuing “a fleeting thought.” Woolgathering calls up our own memories, as the child “glimpses and gleans, piecing together a crazy quilt of truths.” Smith shares the fierce, vital pleasures of stargazing and wandering. Her new Afterword, penned during the quarantine, opens new horizons in “the scarcely charted landscape of memory governed by clouds.”

Patti Smith is a poet, performer, visual artist, and author of M Train and the National Book Award-winning memoir Just Kids. She has twelve albums, has had numerous gallery shows, and continues to give concerts of her music and poetry. Her books include Early Work, The Coral Sea, Witt, Babel, Auguries of Innocence, Woolgathering, Land 250, Trois, and many others. In 2022, Smith was awarded the Ruth Lilly Poetry Prize by the Poetry Foundation in recognition of her outstanding lifetime achievement. She lives in New York.

Smith is well attuned to the otherworldly dimension of dreams and cosmic visions. In this intimate and vaulting collection, she ushers us into the kingdom of childhood…Smith looks to family history for sources of her artistic impulses and portrays herself in adulthood as a roaming mystic, journal in hand, heart and mind open. Exultations of concentrated beauty and mystery ignite Smith’s soulful poems about the making of an artist.
— Booklist

One thing I’ve always admired about Patti Smith is her refusal to be characterized… Such a sensibility — fluid, visionary, risky — marks the eleven pieces in Woolgathering, a collection of impressionistic prose poems that dances at the edge of memoir before opting for something harder to pin down.
— David Ulin - The Los Angeles Times

Half beautiful language and metaphors, half raw emotion, this book (which includes a handful of personal photos) will inspire and influence a new generation of logophiles as they read and reread this absorbing, meditative work.
— Publishers Weekly

Smith pares down her prose to a state of vivid impressionism, so enigmatic that even ordinary acts - preparing mint tea, nodding off while sewing - take on spiritual weight. The passages evoking her childhood reverberate with serene joy.
— The Observer

Capturing moments of her adult life, Smith pares down her prose to a state of vivid impressionism, so enigmatic that even ordinary acts take on spiritual weight.
— The Guardian