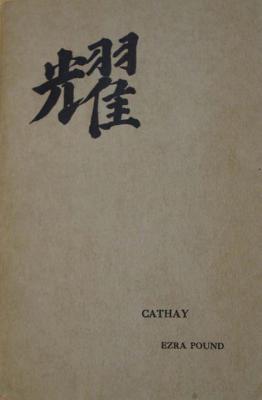 First published in 1915, Cathay, Ezra Pound’s early monumental work, originally contained fourteen translations from the Chinese and a translation of the Anglo-Saxon poem “The Seafarer.” Over time, these poems have been widely read and loved as both translations and original poetry. In 1916, Cathay was reprinted in the book Lustra without “The Seafarer” and with four more Chinese poems. Cathay is greatly indebted to the notes of a Harvard-trained scholar Ernest Fenollosa. “In Fenollosa’s Chinese poetry materials,” Pound scholar Zhaoming Qian writes, “Pound discovered a new model that at once mirrored and challenged his developing poetics.” Edited by Qian, this centennial edition reproduces for the first time the text of the original publication plus the poems from Lustra and transcripts of all the relevant Fenollosa notes and Chinese texts. Also included is a new foreword by Ezra Pound’s daughter Mary de Rachewiltz, providing an appreciation and fascinating background material on this pivotal work of Pound’s oeuvre.

New Directions has been the primary publisher of Ezra Pound in the U.S. since the founding of the press when James Laughlin published New Directions in Prose and Poetry 1936. That year Pound was fifty-one. In Laughlin’s first letter to Pound, he wrote: “Expect, please, no fireworks. I am bourgeois-born (Pittsburgh); have never missed a meal. . . . But full of ‘noble caring’ for something as inconceivable as the future of decent letters in the US.” Little did Pound know that into the twenty-first century the fireworks would keep exploding as readers continue to find his books relevant and meaningful.

Zhaoming Qian is Chair Professor of Modernist Studies at Hangzhou Normal University. His most recent book is Modernism and the Orient (University of New Orleans Press, 2013).

"Pound, transcreating Chinese poetry in English, seems to have anticipated that making it new in our endless, inescapable present would increasingly mean returning to the old."
— Pankaj Mishra - The New York Times Book Review

"With the vers libre of Cathay, T. S. Eliot famously observed, Pound had become "the inventor of Chinese poetry for our time."