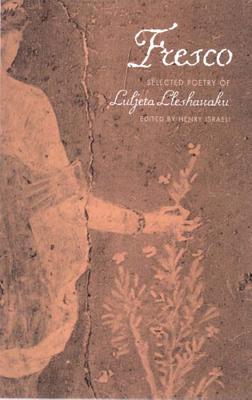 The debut collection in English translation of a leading voice of the new Albanian poetry.

Fresco: Selected Poetry of Luljeta Lleshanaku introduces to English-speaking readers the arresting work of Luljeta Lleshanaku, one of Albania's foremost younger poets. Born in Elbasan in 1968, she grew up under virtual house arrest because of her family's opposition to the Stalinist dictatorship of Enver Hoxha. She was not permitted to attend college or publish her poetry until the weakening and eventual collapse of the Communist regime in the early '90s. She is among the first generation of poets to emerge out of the cultural wasteland of enforced socialist realism in the arts, reinventing Albanian poetry almost entirely from scratch. In a voice at once firm yet quiet and spare, with haunting imagery that challenges the imagination, her highly charged poems carry the burden of her own and her country's past.

For Fresco, editor Henry Israeli has gathered fifty-seven poems from Luljeta Lleshanaku's published books (The Sleepwalker's Eyes, 1992; Sunday Bells, 1994; Half-Cubism, 1996; Antipastoral, 1999) as well as some newer work. His Afterword places her writing within its personal and social context, while an Introduction by the award-winning translator Peter Constantine views the poet from the wider perspective of modern Albanian literature. The poems themselves are translated by Henry Israeli in collaboration with the author and Uk Zenel Bucpapa, Noci Deda, Joanna Goodman, Alban Kupi, Albana Lleshanaku, Lluka Qafoku, Shpresa Qatipi, Qazim Sheme, and Daniel Weissbort. Many of the translations have appeared in such magazines as Grand Street, Denver Quarterly, The Iowa Review, Seneca Review, and Quarterly West.

The author of seven poetry collections, Luljeta Lleshanaku was born in Elbasan, Albania, in 1968, and grew up under house arrest during Enver Hoxha’s Stalinist regime. She has worked as a teacher, literary magazine editor, journalist, screenwriter, and currently is the research director at the Institute of Studies of Communist Genocide in Albania.