The Cartoon Introduction to Statistics (Paperback) 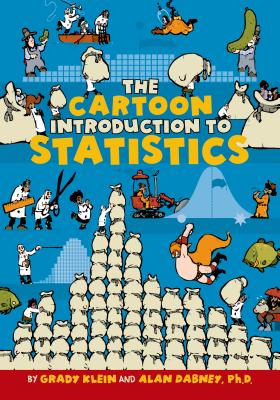 The Cartoon Introduction to Statistics (Paperback)

The Cartoon Introduction to Statistics is the most imaginative and accessible introductory statistics course you'll ever take. Employing an irresistible cast of dragon-riding Vikings, lizard-throwing giants, and feuding aliens, the renowned illustrator Grady Klein and the award-winning statistician Alan Dabney teach you how to collect reliable data, make confident statements based on limited information, and judge the usefulness of polls and the other numbers that you're bombarded with every day. If you want to go beyond the basics, they've created the ultimate resource: "The Math Cave," where they reveal the more advanced formulas and concepts.

Timely, authoritative, and hilarious, The Cartoon Introduction to Statistics is an essential guide for anyone who wants to better navigate our data-driven world.

Alan Dabney, Ph.D., is an award-winning associate professor of statistics at Texas A&M University. He is the coauthor of The Cartoon Introduction to Statistics. He lives in College Station, Texas, with his wife and three children.

“Like a superhero coming to save the day, in flies The Cartoon Introduction to Statistics . . . Its biggest contribution is to tackle the difficulties that arise from collecting data ‘in the wild'--in the real world and not in the laboratory. This makes the book more useful than those that just stick to the concepts . . . If statistics can ever be made fun, then this book shows how.” —The Economist

“A statistician and an artist team up to demystify data crunching for the masses. Through comical tales of dragon racing, worm collecting and soda guzzling, Klein and Dabney illustrate how statisticians gather data and make predictions . . . Entertaining yet thorough.” —Scientific American

“[A] delightful introduction to statistics . . . The genius of the book is in its layout . . . The book's good humor, clear prose, and intelligent layout should give it a probability of success with its readers approaching 100%.” —Publishers Weekly

“A gentle, pleasantly illustrated induction into the strange world of bell curves and chi squares . . . A smart, enjoyable overview of this most useful branch of mathematics.” —Kirkus

“[The Cartoon Introduction to Statistics] manages to amuse and enlighten . . . Grady Klein's . . . grasp of body language makes [the illustrations] expressive and even charming. He builds a cast of characters including scientists (in white lab coats, of course), worm farmers, dragons, pirates, and more through a blocky approach with extreme variations in line width. The authors hatch some genuinely funny jokes.” —Paste Magazine

“Working with Dr. Alan Dabney, Klein runs his agreeable little scientist characters through examples of mathematicians using numbers to quantify, analyze, and make decisions . . . The study of statistics is an ideal subject for comics, since the representation of data as graphs and symbols is akin to what cartoonists do: reducing ideas to pictures, for clarity's sake. Klein goes one step further, turning graphs into a collection of tiny drawings: of dragons, of sacks, of boxes, etc.” —A.V. Club

“Present[s] the basics of how statistics work, how they're generated, what they actually mean, and how they can be manipulated. Klein grounds the whole thing into a narrative-based presentation to keep it from being too dry, and even amusing. Math ‘amusing'? I know, unthinkable! . . . If this is how I learned math, my life would probably be much different.” —Comic Book Resources

“This book is a perfect treatment for anyone with a phobia of statistics or numbers. It is fun, clear, and wonderfully intuitive.” —Charles Wheelan, author of Naked Statistics: Stripping the Dread from the Data

“Thank goodness someone finally wrote a book on statistics that is actually fun to read. Be careful when you buy this book--you might not put it down until you read it all the way to the end.” —Sebastian Thrun, Google Fellow and CEO of Udacity

“It's a well-kept secret that statistics is fun, relevant to everyone, and intellectually rewarding. Grady Klein and Alan Dabney have let the cat out of the bag with their approachable and humorous journey through the fundamental ideas that make statistics indispensable in today's data-rich world.” —John Storey, Professor of Genomics and Statistics, Princeton University