The Greatest of All Leathernecks: John Archer LeJeune and the Making of the Modern Marine Corps (Hardcover) 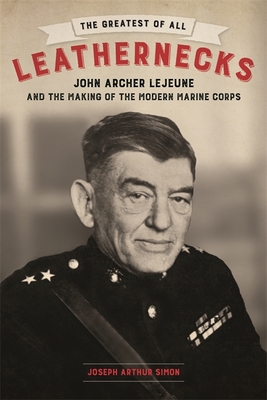 The Greatest of All Leathernecks: John Archer LeJeune and the Making of the Modern Marine Corps (Hardcover)

Joseph Arthur Simon's The Greatest of All Leathernecks is the first comprehensive biography of John Archer Lejeune (1867-1942), a Louisiana native and the most innovative and influential leader of the United States Marine Corps in the twentieth century. As commandant of the Marine Corps from 1920 to 1929, Lejeune reorganized, revitalized, and modernized the force by developing its new and permanent mission of amphibious assault. Before that transformation, the corps was a constabulary infantry force used mainly to protect American business interests in the Caribbean, a mission that did not place it as a significant contributor to the United States defense establishment.

The son of a plantation owner from Pointe Coupee Parish, Lejeune enrolled at Louisiana State University in 1881, aged fourteen. Three years later, he entered the U.S. Naval Academy, afterward serving for two years at sea as a midshipman. In 1890, he transferred to the Marines, where he ascended quickly in rank. During the Spanish-American War, Lejeune commanded and landed Marines at San Juan, Puerto Rico, to rescue American sympathizers who had been attacked by Spanish troops. A few years later, he arrived with a battalion of Marines at the Isthmus of Panama--part of Colombia at the time--securing it for Panama and making possible the construction of the Panama Canal by the United States. He went on to lead Marine expeditions to Cuba and Veracruz, Mexico. During World War I, Lejeune was promoted to major general and given command of an entire U.S. Army division. After the war, Lejeune became commandant of the Marine Corps, a role he used to develop its new mission of amphibious assault, transforming the corps from an ancillary component of the U.S. military into a vibrant and essential branch. He also created the Marine Corps Reserve, oversaw the corps's initial use of aviation, and founded the Marine Corps Schools, the intellectual planning center of the corps that currently exists as the Marine Corps University. As Simon masterfully illustrates, the mission and value of the corps today spring largely from the efforts and vision of Lejeune.
Joseph Arthur Simon is a retired higher education administrator with a doctorate in American military history from Lancaster University, UK.