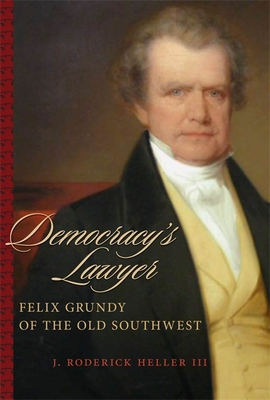 A central political figure in the first post-Revolutionary generation, Felix Grundy (1775--1840) epitomized the American democrat who so famously fascinated Alexis de Tocqueville. Born and reared on the isolated frontier, Grundy rose largely by his own ability to become the Old Southwest's greatest criminal lawyer and one of the first radical political reformers in the fledgling United States. In Democracy's Lawyer, the first comprehensive biography of Grundy since 1940, J. Roderick Heller reveals how Grundy's life typifies the archetypal, post--founding fathers generation that forged America's culture and institutions.
After his birth in Virginia, Grundy moved west at age five to the region that would become Kentucky, where he lost three brothers in Indian wars. He earned a law degree, joined the legislature, and quickly became Henry Clay's main rival. At age thirty-one, after rising to become chief justice of Kentucky, Grundy moved to Tennessee, where voters soon elected him to Congress. In Washington, Grundy proved so voracious a proponent of the War of 1812 that a popular slogan of the day blamed the war on Madison, Grundy, and the Devil.
A pivotal U.S. senator during the presidency of Andrew Jackson, Grundy also served as Martin Van Buren's attorney general and developed a close association with his law student and political prot g James K. Polk. Grundy championed the ideals of the American West, and as Heller demonstrates, his dominating belief -- equality in access to power -- motivated many of his political battles. Aristocratic federalism threatened the principles of the Revolution, Grundy asserted, and he opposed fetters on freedom of opportunity, whether from government or entrenched economic elites.
Although widely known as a politician, Grundy achieved even greater fame as a criminal lawyer. Of the purported 185 murder defendants that he represented, only one was hanged. At a time when criminal trials served as popular entertainment, Grundy's mere appearance in a courtroom drew spectators from miles around, and his legal reputation soon spread nationwide. One nineteenth-century Nashvillian declared that Grundy could stand on a street corner and talk the cobblestones into life.
Shifting seamlessly within the worlds of law, entrepreneurship, and politics, Felix Grundy exemplified the questing, mobile society of early nineteenth-century America. With Democracy's Lawyer, Heller firmly establishes Grundy as a powerful player and personality in early American law and politics.

J. Roderick Heller III, chairman and CEO of a Washington, D.C., investment firm, is coeditor of The Confederacy Is on Her Way up the Spout: Letters to South Carolina, 1861--1864.