The Life of Billy Yank: The Common Soldier of the Union (Political Traditions in Foreign Policy) (Paperback) 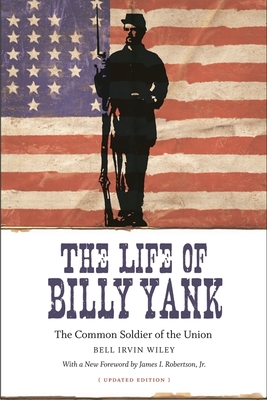 The Life of Billy Yank: The Common Soldier of the Union (Political Traditions in Foreign Policy) (Paperback)

By Bell Irvin Wiley, James I. Robertson (Foreword by)

In this companion to The Life of Johnny Reb, Bell Irvin Wiley explores the daily lives of the men in blue who fought to save the Union. With the help of many soldiers' letters and diaries, Wiley explains who these men were and why they fought, how they reacted to combat and the strain of prolonged conflict, and what they thought about the land and the people of Dixie. This fascinating social history reveals that while the Yanks and the Rebs fought for very different causes, the men on both sides were very much the same. "This wonderfully interesting book is the finest memorial the Union soldier is ever likely to have.... Wiley] has written about the Northern troops with an admirable objectivity, with sympathy and understanding and profound respect for their fighting abilities. He has also written about them with fabulous learning and considerable pace and humor.

Bell Irvin Wiley (1906--1980) was a professor emeritus of history at Emory University and one of America's preeminent Civil War historians. James I. Robertson, Jr., is the author of many books, including the award-winning Stonewall Jackson: The Man, the Soldier, the Legend. Well known for his lectures across the country and his appearances in television documentaries, he is Alumni Distinguished Professor of History at Virginia Tech.