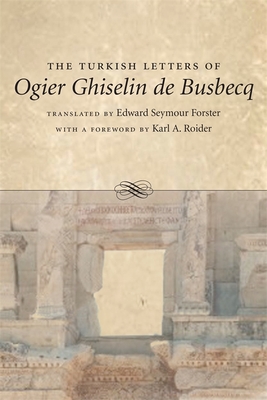 A native of western Flanders, Ogier Ghiselin de Busbecq served in several posts as diplomatic representative for the Habsburg ruler Ferdinand I (King of Bohemia and Hungary, 1526--64, and Holy Roman Emperor, 1556--64). Busbecq's most famous mission was undoubtedly to the Ottoman Empire at the zenith of its power and glory during the reign of Suleiman the Magnificent. In four letters to his friend Nicholas Michault -- who had been Busbecq's fellow student in Italy and afterwards was imperial ambassador to the Portuguese court -- he details impressions on everything he saw and experienced in Turkey, including landscapes, plants, animals, Islam, ethnic groups, architecture, slavery, military matters, court practices, clothing, gender and domestic relations, and the Sultan himself.
Suleiman (spelled Soleiman in the translation) the Magnificent is perhaps the most distinguished figure in Turkish history, and his reign saw the greatest extension of Turkish power. His devotion to his own religion and his tolerance of other faiths, his munificence and generosity, won him the fidelity of his subjects and the respect of his enemies. Busbecq was given the assignment of using diplomacy to check the raids of the Turks into Hungary, and he proved very effective with his quick sympathy, appreciation of the Turkish character, and untiring patience. He returned from Constantinople in the autumn of 1562 with an established reputation as a diplomatist.
Busbecq's Turkish Letters is a treasure of early travel literature, reflecting Busbecq's rich literary talent, classical education, love for collecting antiquities, and remarkable power of observation. Delightfully entertaining reading, it also offers invaluable lessons on understanding and bridging cultural divides.

Edward Seymour Forster (1879--1950) was a lecturer in classics at the University of Sheffield from 1905 to 1945. He translated a number of Aristotle's works as well as other ancient texts for publication in the Loeb Classical Library series. He also wrote several books, including A Short History of Modern Greece. His translation of The Turkish Letters first appeared in 1927.Karl A. Roider is a professor of history at Louisiana State University and the author of four books, including Austria's Eastern Question, 1700--1790.