Transgender Warriors: Making History from Joan of Arc to Marsha P. Johnson and Beyond (Paperback) 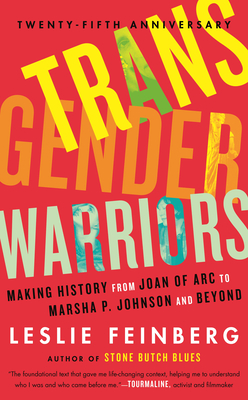 Transgender Warriors: Making History from Joan of Arc to Marsha P. Johnson and Beyond (Paperback)


Usually Ships in 1-5 Days
“The foundational text that gave me life-changing context, helping me to understand who I was and who came before me.”—Tourmaline, activist and filmmaker

This groundbreaking book—far ahead of its time when first published in 1996 and still galvanizing today—interweaves history, memoir, and gender studies to show that transgender people, far from being a modern phenomenon, have always existed and have exerted their influence throughout history. Leslie Feinberg—hirself a lifelong transgender revolutionary—reveals the origin of the check-one-box-only gender system and shows how zie found empowerment in the lives of transgender warriors around the world, from the Two Spirits of the Americas to the many genders of India, from the trans shamans of East Asia to the gender-bending Queen Nzinga of Angola, from Joan of Arc to Marsha P. Johnson and beyond.

This book was published with two different covers. Customers will be shipped the book with one of the available covers.
Leslie Feinberg, born in Kansas City, Missouri, in 1949, was a transgender activist, a revolutionary communist, and the author of 5 books, including Trans Liberation: Beyond Pink or Blue and the Lambda Award-winning novel Stone Butch Blues. Zie died in 2014. In 2019, zie was one of the first 50 LGBTQ leaders to be honored on the newly dedicated National LGBTQ Wall of Honor at the Stonewall Inn in New York City.
Men and women have had their histories. This is the history book for the rest of us.--Kate Bornstein, author of Gender Outlaw

"[Transgender Warriors] leaves us with a sense that a transgendered concept of what it is to be fully human and psychologically whole is both valid and nothing new. A brief review cannot do justice to this amazing resource, not only for our communities, but for the world."--Patricia Roth Schwartz, Lambda Book Report

"[Transgender Warriors] does far more than document the history of transgenders. It delves into the transgender experience, inviting the reader to consider a spectrum of gender possibilities." --Linda Gebroe, San Francisco Chronicle Book Review

"No book since Toni Morrison's Beloved gives so much and holds itself so well. History becomes art, the political becomes transformative, the personal becomes universal." --Craig Hickman, Gay Community News

"The challenge Feinberg sets forth-a complex, multisided one-is to take up the banner of feminism and extend it, stretch it, until it has room for all women."--Rosemarie C. Sultan, Sojourner

"A ground-breaking gift to both the transgender community and the world at large."--Rachel Reed, Synapse

"Nobody will remain unaffected by this book." --Heather Findlay, Girlfriends