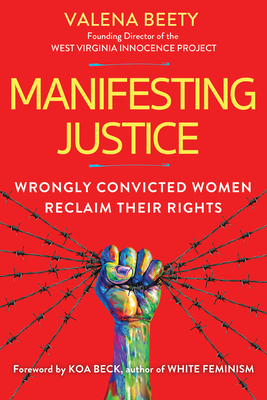 
Usually Ships in 1-5 Days
“Just as the Black Lives Matter movement and recent protests have shown the leadership of women of color in organizing against the prison state, this book will show the leadership of women, which is too often ignored, in the innocence movement.” —Aya Gruber, Professor of Law, University of Colorado Law School, author of The Feminist War on Crime


Through the lens of her work with the Innocence Movement and her client Leigh Stubbs—a woman denied a fair trial in 2000 largely due to her sexual orientation - innocence litigator, activist, and founder of the West Virginia Innocence Project Valena Beety examines the failures in America’s criminal legal system and the reforms necessary to eliminate wrongful convictions—particularly with regards to women, the queer community, and people of color…

When Valena Beety first became a federal prosecutor, her goal was to protect victims, especially women, from cycles of violence. What she discovered was that not only did prosecutions often fail to help victims, they frequently relied on false information, forensic fraud, and police and prosecutor misconduct.

Seeking change, Beety began working in the Innocence Movement, helping to free factually innocent people through DNA testing and criminal justice reform. Manifesting Justice focuses on the shocking story of Beety’s client Leigh Stubbs—a young, queer woman in Mississippi, convicted of a horrific crime she did not commit because of her sexual orientation. Beety weaves Stubbs’s harrowing narrative through the broader story of a broken criminal justice system where defendants—including disproportionate numbers of women of color and queer individuals—are convicted due to racism, prejudice, coerced confessions, and false identifications.

Drawing on interviews with both innocence advocates and wrongfully convicted women, along with Beety’s own experiences as an expert litigator and a queer woman, Manifesting Justice provides a unique outsider/insider perspective. Beety expands our notion of justice to include not just people who are factually innocent, but those who are over-charged, pressured into bad plea deals, and over-sentenced. The result is a riveting and timely book that not only advocates for reforming the conviction process—it will transform our very ideas of crime and punishment, what innocence is, and who should be free.

With a Foreword by Koa Beck, author of White Feminism
Valena Beety is a former federal prosecutor and innocence litigator who represented Leigh Stubbs in post-conviction. She has successfully exonerated wrongfully convicted clients, obtained presidential grants of clemency for drug offenders, served as an elected board member of the national Innocence Network, and was appointed commissioner on the West Virginia Governor’s Indigent Defense Commission.  She is currently a Professor of Law at Arizona State University Sandra Day O’Connor College of Law and the Deputy Director of the Academy for Justice, a criminal justice center at the law school that connects research with policy reform.  Previously, she founded and directed the West Virginia Innocence Project at the West Virginia University College of Law and practiced as a Senior Staff Attorney at the Mississippi Innocence Project, representing clients on death row. Visit her online at ValenaBeety.com.

With a foreword by Koa Beck, author of White Feminism.

“A shocking study of how the criminal justice system discriminates … an invigorating and eye-opening call to action.” —Publishers Weekly

“Manifesting Justice is a powerfully disruptive book that promises to usher in a new era of the Innocence Movement.” —Alison Flowers, investigative journalist and author of Exoneree Diaries: The Fight for Innocence, Independence and Identity

“As a journalist covering innocence cases who has grappled with so many of the questions this book addresses—including what really constitutes a wrongful conviction and how to make readers feel invested in cases involving challenging or non-sympathetic subjects—I can’t overstate the need for these discussions.” —Liliana Segura, award-winning investigative journalist at The Intercept

“Valena Beety does more than talk the talk—she has walked the walk and fought the battle to exonerate, to educate, and to reform. In Manifesting Justice, Beety does more than tell tales from the front in the fight for innocence. She shares the stories of other path-breakers who have committed their lives to freeing the innocent. But more than that, these ‘invisible leaders’ have come to reshape criminal justice writ large.” —Maurice Possley, Pulitzer Prize winning journalist and best-selling author

“Beety's Manifesting Justice fills important gaps in our conversation around the criminal justice system and innocence. Not only does it elevate the oft invisible-ized stories of women defendants, litigators and advocates, it also moves away from a narrative centering the ‘perfect victim’ of wrongful conviction to an interrogation of the injustices scaffolding the legal system itself—with a necessary (if painful) critique of how the current innocence movement ultimately reinforces that scaffolding.” —Jen Marlowe, author of I Am Troy Davis & founder of Donkeysaddle Projects

“Valena Beety demonstrates her unique ability of listening to the leaders at the heart of the innocence movement and sharing their deeply personal stories from a place of personal understanding.  Few people could gather the wisdom and insight she has from innocence litigators and activists.” —Jessica Blank, co-author of the internationally award-winning play “The Exonerated,” which inspired an award-winning film, and co-author of new documentary play “Coal Country”

“It is critical to recognize the collective toll of wrongful convictions and all who are impacted by them - not only exonerees, crime victims, and their families but also prosecutors, law enforcement, innocence lawyers, judges, jurors, activists, professors, and support providers. ‘Manifesting Justice’ gathers a multiplicity of voices to share a broader narrative for wrongful convictions work.” —Jennifer Thompson, Founder of Healing Justice and author of the national best-seller Picking Cotton: Our Memoir of Injustice and Redemption

“With recent events spotlighting the deep wrongs of the American penal system, there is a public hunger for personal accounts of what it actually takes to fight an entrenched carceral system that long enjoyed immunity from public scrutiny.  What is especially exciting about these accounts is that they center women as the protagonists.  Many of the books on policing, prosecution, and punishment center the stories of men, both as the victims of the system and the lawyers advocating for them.  Just as the Black Lives Matter movement and recent protests have shown the leadership of women of color in organizing against the prison state, this book will show the leadership of women, which is too often ignored, in the innocence movement.” —Aya Gruber, Professor of Law, University of Colorado Law School, author of The Feminist War on Crime: The Unexpected Role of Women's Liberation in Mass Incarceration

“I Finally, the cannon of literature on wrongful convictions will have what has long been missing: a compelling narrative account including the strong and diverse group of women at the center of the innocence movement.” —Professor Lara Bazelon, University of San Francisco School of Law, Philip and Muriel C. Barnett Chair in Trial Advocacy, author of Rectify: The Power of Restorative Justice After Wrongful Conviction