Does People Do It?: A Memoirvolume 5 (Stories and Storytellers #5) (Paperback) 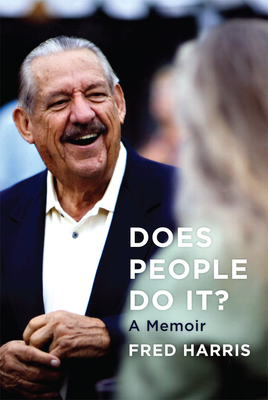 Does People Do It?: A Memoirvolume 5 (Stories and Storytellers #5) (Paperback)

One of Oklahoma's most famous native sons, Fred Harris faced life's challenges with the same resolve as a favorite uncle: "Does people do it? If people does it, I can do it." In this engaging memoir, he describes how he met those challenges head-on.

A child of the Great Depression, Harris grew up in the small town of Walters, Oklahoma, where he was born in a two-room house. He describes that upbringing and his initiation into state politics, and tells how he was elected to the U.S. Senate at the age of thirty-three. As he recounts his experiences in national politics, he yields an insightful look at the turbulent 1960s and 1970s.

Earning a reputation as a "new populist," Harris chaired the national Democratic Party and was a serious presidential candidate. Along the way, he encountered such giants as Lyndon B. Johnson, Hubert Humphrey, and Robert F. Kennedy. Enlivening his account with firsthand conversations, Harris contributes to our understanding of the motivations and personalities of these figures--including the infamous tensions between Johnson and Kennedy. Despite rubbing elbows with such power brokers, Harris maintained his own reputation as a down-to-earth man of the people whose advocacy included American Indian causes.

Harris accomplished much in his distinguished career, championing human rights at home and around the world. His masterfully written memoir attests to a philosophical consistency and humane liberalism that today are all too rare.