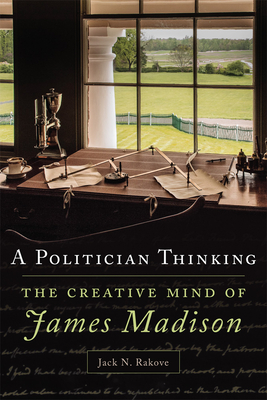 James Madison presented his most celebrated and studied political ideas in his contributions to The Federalist, the essays that he, Alexander Hamilton, and John Jay wrote in 1787-1788 to secure ratification of the U.S. Constitution. As Jack N. Rakove shows in A Politician Thinking, however, those essays do not illustrate the full complexity and vigor of Madison's thinking. In this book, Rakove pushes beyond what Madison thought to examine how he thought, showing that this founder's political genius lay less in the content of his published writings than in the ways he turned his creative mind to solving real political problems.

Rakove begins his analysis by examining how Madison drew upon his experiences as a member of the Continental Congress and as a Virginia legislator to develop his key ideas. Madison sought to derive lessons of history from his reading and his own experience, but he also thought about politics in terms of what we now recognize as game theory. After discussing Madison's approach to the challenge of constitutional change, Rakove emphasizes his strikingly modern understanding of legislative deliberation, which he treated as the defining problem of republican government. Rakove also addresses Madison's deliberation about ways to protect the rights of individuals and political minorities from the rule of "factious majorities." The book closes by tracing how Madison developed strategies for maintaining long-term constitutional stability and adjusting to the new realities of governance under the Constitution.

Engaging and accessible, A Politician Thinking offers new insight concerning a key constitutional thinker and the foundations of the American constitutional system. Having a more thorough understanding of how Madison solved the problems presented in the formation of that system, we better grasp a unique moment of political innovation.