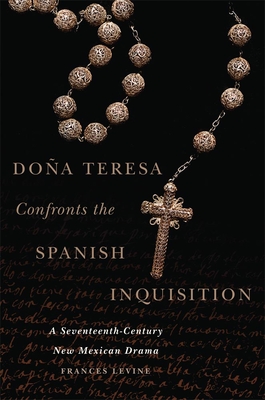 In 1598, at the height of the Spanish Inquisition, New Mexico became Spain's northernmost New World colony. The censures of the Catholic Church reached all the way to Santa Fe, where in the mid-1660s, Do a Teresa Aguilera y Roche, the wife of New Mexico governor Bernardo L pez de Mendiz bal, came under the Inquisition's scrutiny. She and her husband were tried in Mexico City for the crime of judaizante, the practice of Jewish rituals. Using the handwritten briefs that Do a Teresa prepared for her defense, as well as depositions by servants, ethnohistorian Frances Levine paints a remarkable portrait of daily life in seventeenth-century New Mexico. Do a Teresa Confronts the Spanish Inquisition also offers a rare glimpse into the intellectual and emotional life of an educated European woman at a particularly dangerous time in Spanish colonial history. New Mexico's remoteness attracted crypto-Jews and conversos, Jews who practiced their faith behind a front of Roman Catholicism. But were Do a Teresa and her husband truly conversos? Or were the charges against them simply their enemies' means of silencing political opposition? Do a Teresa had grown up in Italy and had lived in Colombia as the daughter of the governor of Cartagena. She was far better educated than most of the men in New Mexico. But education and prestige were no protection against persecution. The fine furnishings, fabrics, and tableware that Do a Teresa installed in the Palace of the Governors in Santa Fe made her an object of suspicion and jealousy, and her ability to read and write in several languages made her the target of outlandish claims. Do a Teresa Confronts the Spanish Inquisition uncovers issues that resonate today: conflicts between religious and secular authority; the weight of evidence versus hearsay in court. Do a Teresa's voice--set in the context of the history of the Inquisition--is a powerful addition to the memory of that time.