The Unconquerable World: Power, Nonviolence, and the Will of the People (Paperback) 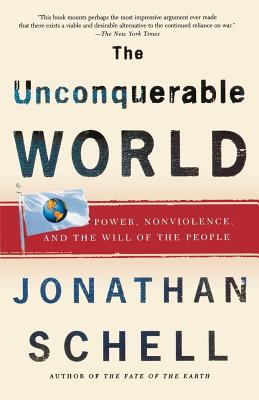 The Unconquerable World: Power, Nonviolence, and the Will of the People (Paperback)

"This book mounts perhaps the most impressive argument ever made that there exists a viable and desirable alternative to the continued reliance on war." -The New York Times

At times of global crisis, Jonathan Schell's writings have offered important alternatives to conventional thinking. Now, as conflict escalates around the world, Schell gives us an impassioned, provocative book that points the way out of the unparalleled devastation of the twentieth century toward another, more peaceful path.

Tracing the expansion of violence to its culmination in nuclear stalemate, Schell uncovers a simultaneous but little-noted history of nonviolent action at every level of political life. His investigation ranges from the revolutions of America, France, and Russia, to the people's wars of China and Vietnam, to the great nonviolent events of modern times-including Gandhi's independence movement in India and the explosion of civic activity that brought about the surprising collapse of the Soviet Union.

Suggesting foundations of an entirely new kind on which to construct an enduring peace, The Unconquerable World is a bold book of sweeping significance.

Jonathan Schell, author of The Unconquerable World and The Fate of the Earth among many other titles, is the Nation Institute’s Harold Willens Peace Fellow. His “Letter from Ground Zero” column appears in The Nation regularly. He also writes for Harper’s, The Atlantic Monthly, Foreign Affairs, and Tomdispatch.com. He is a distinguished visiting fellow at the Yale Center for the Study of Globalization.