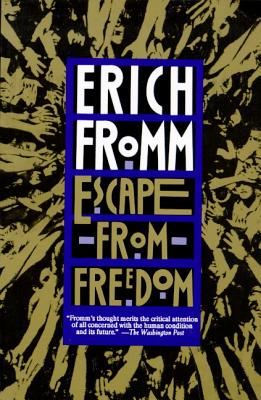 If humanity cannot live with the dangers and responsibilities inherent in freedom, it will probably turn to authoritarianism. This is the central idea of Escape from Freedom, a landmark work by one of the most distinguished thinkers of our time, and a book that is as timely now as when first published in 1941. Few books have thrown such light upon the forces that shape modern society or penetrated so deeply into the causes of authoritarian systems. If the rise of democracy set some people free, at the same time it gave birth to a society in which the individual feels alienated and dehumanized. Using the insights of psychoanalysis as probing agents, Fromm's work analyzes the illness of contemporary civilization as witnessed by its willingness to submit to totalitarian rule.

Erich Fromm was a German-born American psychoanalyst and social philosopher who explored the interaction between psychology and society. His works include The Art of Loving, Escape from Freedom, and The Sane Society. He died in 1980.

“An analysis par excellence of our cultural neurosis.” —The Nation

“An important and challenging work.” —The New York Herald Tribune

“Fromm's thought merits the critical attention of all concerned with the human condition and its future.” —The Washington Post