Recovering Armenia: The Limits of Belonging in Post-Genocide Turkey (Paperback) 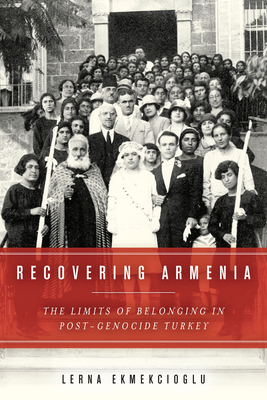 Recovering Armenia: The Limits of Belonging in Post-Genocide Turkey (Paperback)

Recovering Armenia offers the first in-depth study of the aftermath of the 1915 Armenian Genocide and the Armenians who remained in Turkey. Following World War I, as the victorious Allied powers occupied Ottoman territories, Armenian survivors returned to their hometowns optimistic that they might establish an independent Armenia. But Turkish resistance prevailed, and by 1923 the Allies withdrew, the Turkish Republic was established, and Armenians were left again to reconstruct their communities within a country that still considered them traitors. Lerna Ekmekcioglu investigates how Armenians recovered their identity within these drastically changing political conditions.

Reading Armenian texts and images produced in Istanbul from the close of WWI through the early 1930s, Ekmekcioglu gives voice to the community's most prominent public figures, notably Hayganush Mark, a renowned activist, feminist, and editor of the influential journal Hay Gin. These public figures articulated an Armenianess sustained through gendered differences, and women came to play a central role preserving traditions, memory, and the mother tongue within the home. But even as women were being celebrated for their traditional roles, a strong feminist movement found opportunity for leadership within the community. Ultimately, the book explores this paradox: how someone could be an Armenian and a feminist in post-genocide Turkey when, through its various laws and regulations, the key path for Armenians to maintain their identity was through traditionally gendered roles.

Lerna Ekmekcioglu is Associate Professor of History and Women's Studies at Massachusetts Institute of Technology.