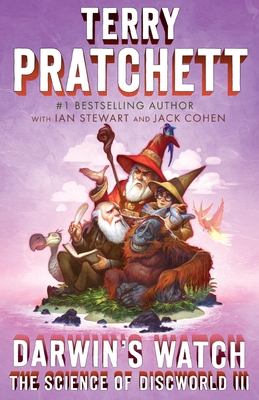 This is book number 3 in the Science of Discworld Series series.

When Charles Darwin writes the wrong book and reverses the progress of science, Unseen University’s wizards must once again save Roundworld (Earth, that is) from an apocalyptic end.

Ever since a wizardly experiment inadvertently brought about the creation of Roundworld, the wizard scholars of Unseen University have done their best to put things on the right course. In Darwin's Watch they may face their greatest challenge yet: A man called Darwin has written a bestselling book called The Theology of the Species, and his theory of scientific design has been witlessly embraced by Victorian society. As a result, scientific progress has slowed to a crawl, and the wizards must find a way to change history back to the way it should have been.

DARWIN'S WATCH EXPLORES THE REVERBERATIONS of major scientific advances on our planet and our culture, the dangers of obscurantism, and the theory of evolution as you have never seen it before. This brilliant addition to Pratchett's beloved Discworld series illustrates with great wit and wisdom how the laws of our universe truly are stranger than fiction.
TERRY PRATCHETT is the acclaimed creator of the global bestselling Discworld series, the first of which, The Color of Magic, was published in 1983. In all, he is the author of over seventy books. His novels have been widely adapted for stage and screen, and he was the winner of multiple prizes, including the Carnegie Medal, as well as being awarded a knighthood for services to literature. Worldwide sales of his books now stand at over 85 million (but who’s counting), and they have been published in thirty-eight languages. He died in 2015.

www.terrypratchettbooks.com
“An irreverent but genuinely profound romp through the history and philosophy of science, cunningly disguised as a collection of funny stories about wizards and mobile luggage.” —Frontiers

“[Pratchett alters] history with such brilliant effortlessness . . . it all gels into a cohesive and exciting whole — which demands to be both read and enjoyed. For anyone looking for something fresh or even more off the beaten path than Pratchett’s own ‘Discworld’ universe, one would be hard pressed to find a better pick than this.” —ScienceFiction.com