Everything Is Wonderful: Memories of a Collective Farm in Estonia (Paperback) 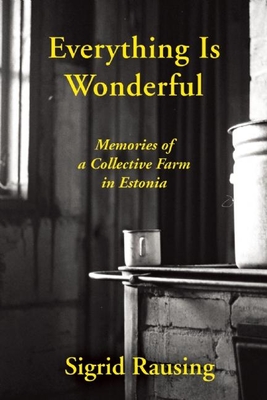 Everything Is Wonderful: Memories of a Collective Farm in Estonia (Paperback)


Usually Ships in 1-5 Days
From 1993 to 1994, Sigrid Rausing completed her anthropological fieldwork on the penninsula of Noarootsi, a former Soviet border protection zone in Estonia. Abandoned watchtowers dotted the coastline, and the huge fields of the Lenin collective farm were laying fallow, waiting for claims from former owners who had fled war and Soviet and Nazi occupation. Rausing's research focused on the loss of historical memory during the Soviet occupation, and the slow revival of an independent Estonian culture, including the recognition of the minority Swedes in Estonia. She lived and worked amongst the villagers, witnessing their transition from repression to independence, and from Soviet neglect to post-Soviet austerity.

Sigrid Rausing is a writer, philanthropist, anthropologist, and publisher. She is the founder of the Sigrid Rausing Trust and publisher of "Granta" and Granta Books. She has won several awards for her work in philanthropy and human rights, serves on the advisory board of the Coalition for the International Criminal Court, and is an emeritus member of the international board of Human Rights Watch.