The Ancient City: A Study on the Religion, Laws, and Institutions of Greece and Rome (Paperback) 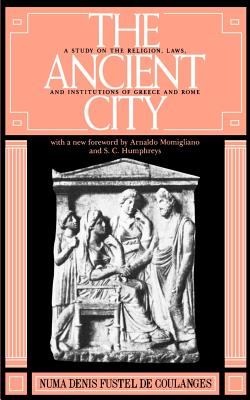 The Ancient City: A Study on the Religion, Laws, and Institutions of Greece and Rome (Paperback)

Originally published in 1864 as La Cit Antique, this remarkable work describes society as it existed in Greece during the age of Pericles and in Rome at the time of Cicero. Working with only a fraction of the materials available to today's classical scholar, Fustel de Coulanges fashioned a complete picture of life in the ancient city, resulting in a book impressive today as much for the depth of its portrait as for the thesis it presents.

In The Ancient City, Fustel argues that primitive religion constituted the foundation of all civic life. Developing his comparisons between belifes and laws, Fustel covers such topis as rites and festivals; marriage and the family; divorce, death, and burial; and political and legal structures. Religion, the suthor states, constituted the Greek and Roman family, established marriage and paternal authority, fixed the order of relationship, and consecrated the right of propery, and the right of inheritance. This same religion, after having enlarged and extended the family, formed a stull larger association, the city, and reigned in that as it had reigned in the family. From it came all the institutions, as well as the private law, of the ancients.

As Arnaldo Momigliano and S. C. Humphreys note in their foreword, The Ancient City rightly takes its place alongside a number of pioneering works of the late nineteenth century that offered radically new inerpretations of ancient society and culture. Indeed, modern anthropology, as well as classics, owes a debt to Fustel de Coulanges, whose early insights in The Ancient City remain valid and provocative today.