Race for the Exits: The Unraveling of Japan's System of Social Protection (Hardcover) 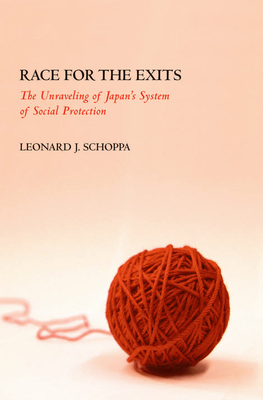 Race for the Exits: The Unraveling of Japan's System of Social Protection (Hardcover)

Contrary to all expectations, Japan's long-term recession has provoked no sustained political movement to replace the nation's malfunctioning economic structure. The country's basic social contract has so far proved resistant to reform, even in the face of persistently adverse conditions. In Race for the Exits, Leonard J. Schoppa explains why it has endured and how long it can last. The postwar Japanese system of convoy capitalism traded lifetime employment for male workers against government support for industry and the private (female) provision of care for children and the elderly. Two social groups bore a particularly heavy burden in providing for the social protection of the weak and dependent: large firms, which committed to keeping their core workforce on the payroll even in slow times, and women, who stayed home to care for their homes and families.

Using the exit-voice framework made famous by Albert Hirschman, Schoppa argues that both groups have chosen exit rather than voice, depriving the political process of the energy needed to propel necessary reforms in the system. Instead of fighting for reform, firms slowly shift jobs overseas, and many women abandon hopes of accommodating both family and career. Over time, however, these trends have placed growing economic and demographic pressures on the social contract. As industries reduce their domestic operations, the Japanese economy is further diminished. Japan has also experienced a baby bust as women opt out of motherhood. Schoppa suggests that a radical break with the Japanese social contract of the past is becoming inevitable as the system slowly and quietly unravels.

Leonard J. Schoppa is Professor of Politics at the University of Virginia. He is the author of Education Reform in Japan: A Case of Immobilist Politics and Bargaining with Japan: What American Pressure Can and Cannot Do.