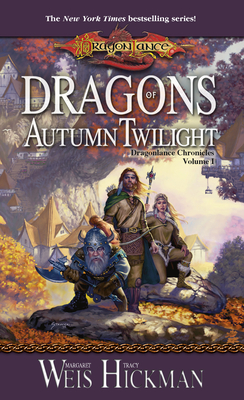 
Usually Ships in 1-5 Days
This Dungeons & Dragons-inspired fantasy adventure is the first installment in the beloved Dragonlance Chronicles, set in the magical world of Krynn

Once merely creatures of legend, the dragons have returned to Krynn. But with their arrival comes the departure of the old gods—and all healing magic. As war threatens to engulf the land, lifelong friends reunite for an adventure that will change their lives and shape their world forever . . .

When Tanis, Sturm, Caramon, Raistlin, Flint, and Tasslehoff see a woman use a blue crystal staff to heal a villager, they wonder if it's a sign the gods have not abandoned them after all. Fueled by this glimmer of hope, the Companions band together to uncover the truth behind the gods' absence—though they aren't the only ones with an interest in the staff. The Seekers, a new religious order, wants the artifact for their own ends, believing it will help them replace the gods and overtake the continent of Ansalon. Now, the Companions must assume the unlikely roles of heroes if they hope to prevent the staff from falling into the hands of darkness.

Dragons of Autumn Twilight is the first book in the Dragonlance Chronicles.
Margaret Weis and Tracy Hickman published their first novel in the Dragonlance Chronicles, Dragons of Autumn Twilight, in 1984. Over twenty years later, they are going strong as partners—with over thirty novels as collaborators—and have published over a hundred books, including novels, collections of short stories, role-playing games, and other game products alone or with other co-authors. Hickman is also the inspiration for the "Tracy Hickman Presents" line of Dragonlance novels for Wizards of the Coast. Weis is the President of Sovereign Press, which publishes Dragonlance game material as well as many other game products.