Against All Enemies (A Jonathan Grave Thriller #7) (Mass Market) 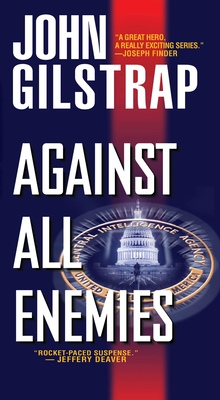 Against All Enemies (A Jonathan Grave Thriller #7) (Mass Market)

This is book number 7 in the A Jonathan Grave Thriller series.

Jonathan Grave finds it hard to believe that a fellow combat vet has gone rogue, killing American agents and leaking sensitive intel to hostile foreign interests. With black ops assassins on the trail of his old friend, Grave sets out to get to him first. He finds far more than he bargained for.  Not only the wily operative, but evidence of a conspiracy so dangerous, so far-reaching, that an unthinkable tragedy is in-motion. Grave and his elite team of specialists must expose a deadly high-level secret —and do it in time to avert a catastrophe of historic proportions…
John Gilstrap is the New York Times bestselling author of the Jonathan Grave thriller series and other fiction and nonfiction. His novel Against All Enemies won the award for best paperback original of 2015 given by the International Thriller Writers. His books have been translated into more than twenty languages. An explosives safety expert and former firefighter, he holds a master’s degree from the University of Southern California and a bachelor’s degree from the College of William and Mary in Virginia. He lives in Fairfax, Virginia. Please visit him on Facebook or at www.johngilstrap.com.

Praise for John Gilstrap and His Thrillers

"Gilstrap is one of the finest thriller writers on the planet."
—Tess Gerritsen

"Gilstrap is a master of action and drama."
—Gayle Lynds

"When you pick up a Gilstrap novel, one thing is always true—you are going to be entertained at a high rate of speed."
—Suspense Magazine