My First Five Husbands...And the Ones Who Got Away: A Memoir (Paperback) 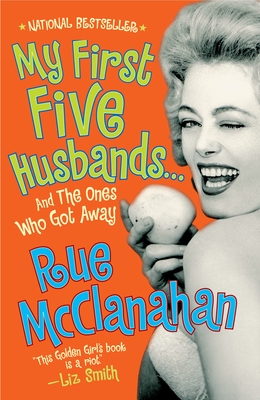 My First Five Husbands...And the Ones Who Got Away: A Memoir (Paperback)


Email or call for price
Rue McClanahan, best known for her portrayal of Blanche Devereaux on the Emmy-award winning series The Golden Girls reveals her life in and out of the spotlight in a laugh-out-loud funny memoir about love, marriage, men, and getting older that is every bit as colorful as the characters she played.

Raised in small-town Oklahoma in a house “thirteen telephone poles past the standpipe north of town,” Rue developed her two great passions—theater and men—at an early age. She arrived in New York City in 1957 with two-weeks worth of money in her pocket, hustled her way into a class with the legendary Uta Hagen, and began working her way up in the acting world against the vibrant, free-spirited backdrop of the sixties. That’s when she met and married Husband #1—a handsome rogue of an aspiring actor who quickly left her with a young son. Still, she was determined to make it on the stage and screen—and in the years that followed, rose to the top of the entertainment world with a host of adventures (and husbands) along the way.

From her roles on Broadway opposite Dustin Hoffman and Brad Davis, to her first television appearances on Maude and All in the Family, to the Golden Girls era and beyond, My First Five Husbands is the irresistible story of one woman’s quest to find herself. Rue is proof that many things can and do get better with age—and that, if she keeps her wits about her, even a small-town girl can make it big.

People always ask me if I'm like Blanche. And I say, 'Well, Blanche was an oversexed, self-involved, man-crazy, vain Southern Belle from Atlanta—and I'm not from Atlanta!’” —Rue McClanahan
Rue McClanahan was born in Healdton, Oklahoma, and graduated cum laude in theater from the University of Tulsa. Most noted for her role as Blanche on The Golden Girls, McClanahan has had a number of well-known starring roles in television and on Broadway. In addition to her work as an actress, McClanahan spoke regularly for breast cancer awareness and prevention of cruelty toward animals. She lived in New York City with her husband, Morrow Wilson, and her cat, Bianca, until her death in 2010.
“McClanahan’s unpretentious candor and wit reveal an irrepressible personality full of vitality and determination.” —BookPage

“Fans will relish her sweet and tart memories” —Publishers Weekly

“Like a night out with the Golden Girls.” —Library Journal