Dean and Me: (A Love Story) (Paperback) 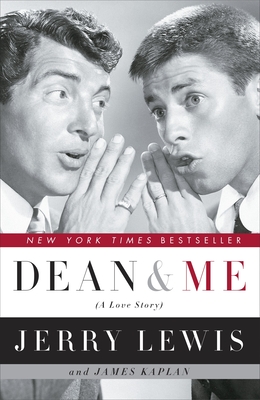 Dean and Me: (A Love Story) (Paperback)


Email or call for price
In a memoir by turns moving, tragic, and hilarious, Jerry Lewis recounts with crystal clarity every step of his fifty-year friendship with Dean Martin.

They were the unlikeliest of pairs—a handsome crooner and a skinny monkey, an Italian from Steubenville, Ohio, and a Jew from Newark, N.J.. Before they teamed up, Dean Martin seemed destined for a mediocre career as a nightclub singer, and Jerry Lewis was dressing up as Carmen Miranda and miming records on stage. But the moment they got together, something clicked—something miraculous—and audiences saw it at once.

Before long, they were as big as Elvis or the Beatles would be after them, creating hysteria wherever they went and grabbing an unprecedented hold over every entertainment outlet of the era: radio, television, movies, stage shows, and nightclubs. Martin and Lewis were a national craze, an American institution. The millions flowed in, seemingly without end—and then, on July 24, 1956, ten years after it all started, it ended suddenly. After that traumatic day, the two wouldn’t speak again for twenty years. And while both went on to forge triumphant individual careers—Martin as a movie and television star, recording artist, and nightclub luminary (and charter member of the Rat Pack); Lewis as the groundbreaking writer, producer, director, and star of a series of hugely successful movie comedies—their parting left a hole in the national psyche, as well as in each man’s heart.

In Dean & Me, Lewis makes a convincing case for Martin as one of the great—and most underrated—comic talents of our era. But what comes across most powerfully in this definitive memoir is the depth of love Lewis felt for his partner, and which his partner felt for him: truly a love to last for all time.
JERRY LEWIS and Dean Martin sandwiched sixteen money-making films in between nightclub engagements, recording sessions, radio shows, and television bookings during their ten-year partnership. Over the following years Lewis remained in the spotlight as the groundbreaking creator and star of a series of hugely successful movie comedies, and scored triumphs in stage appearances in Europe, where he has been hailed as one of the greatest director-comedians of the twentieth century. He was nominated for the Nobel Peace Prize, and has received numerous other honors for his tireless efforts in the fight against the fourty neuromuscular diseases.
JAMES KAPLAN has written novels, essays, and reviews, as well as over a hundred major profiles for many magazines, including The New Yorker, the New York Times Magazine, Vanity Fair, Esquire, Entertainment Weekly, and New York. In 2002 Kaplan coauthored the autobiography of John McEnroe, You Cannot Be Serious, which was an international bestseller (and #1 on the New York Times list). He lives in Westchester, New York, with his wife and three sons.
“This is a wild, joyous book, but also a heartbreaking one. In some ways, friendships between men can be more fragile than those between women, something Lewis grasps intuitively. What kind of guy laughs when you upstage his crooning with a piece of raw meat on a fork? Whoever he is, you’d better hang onto him: he’s probably the best friend you’ll ever have.”
—Stephanie Zacharek, The New York Times

“A perceptive and entertaining showbiz memoir that should become a classic of its kind...”
—Bruce Handy, Vanity Fair