North to the Night: A Spiritual Odyssey in the Arctic (Paperback) 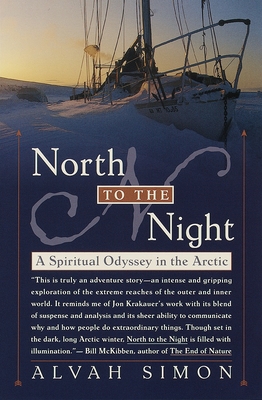 North to the Night: A Spiritual Odyssey in the Arctic (Paperback)


Usually Ships in 1-5 Days
In June 1994 Alvah Simon and his wife, Diana, set off in their 36-foot sailboat to explore the hauntingly beautiful world of icebergs, tundra, and fjords lying high above the Arctic Circle. Four months later, unexpected events would trap Simon alone on his boat, frozen in ice 100 miles from the nearest settlement, with the long polar night stretching into darkness for months to come.

With his world circumscribed by screaming blizzards and marauding polar bears and his only companion a kitten named Halifax, Simon withstands months of crushing loneliness, sudden blindness, and private demons. Trapped in a boat buried beneath the drifting snow, he struggles through the perpetual darkness toward a spiritual awakening and an understanding of the forces that conspired to bring him there. He emerges five months later a transformed man.

Simon's powerful, triumphant story combines the suspense of Into Thin Air with a crystalline, lyrical prose to explore the hypnotic draw of one of earth's deepest and most dangerous wildernesses.
Alvah Simon spent thirteen years sailing the world, finding adventure in Borneo's jungles, Africa's deserts, and Cape Horn's ship graveyards. For their Arctic journey, he and his wife, Diana, received the 1997 Cruising World Outstanding Seamanship Award. The Simons live aboard the Roger Henry.
"This is truly an adventure story--an intense and gripping exploration of the extreme reaches of the outer and inner world. It reminds me of Jon Krakauer's work with its blend of suspense and analysis and its sheer ability to communicate why and how people do extraordinary things. Though set in the dark, long Arctic winter, North to the Night is filled with illumination."
-- Bill McKibben, author of The End of Nature

"A grand adventure on a vast and awesome scale, wrought onto paper by a writer with a true gift."
--The Washington Times

"The flair of a storyteller and the outlook of a philosopher . . ."
--The Buffalo News