Head On: A Novel of the Near Future (The Lock In Series #2) (Hardcover) 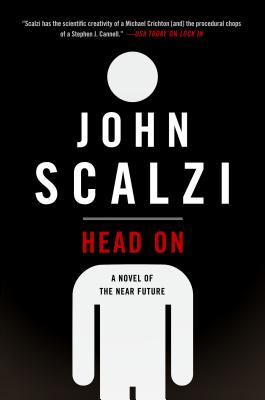 Head On: A Novel of the Near Future (The Lock In Series #2) (Hardcover)

This is book number 2 in the The Lock In Series series.

John Scalzi returns with Head On, the standalone follow-up to the New York Times bestselling and critically acclaimed Lock In. Chilling near-future SF with the thrills of a gritty cop procedural, Head On brings Scalzi's trademark snappy dialogue and technological speculation to the future world of sports.

Hilketa is a frenetic and violent pastime where players attack each other with swords and hammers. The main goal of the game: obtain your opponent’s head and carry it through the goalposts. With flesh and bone bodies, a sport like this would be impossible. But all the players are “threeps,” robot-like bodies controlled by people with Haden’s Syndrome, so anything goes. No one gets hurt, but the brutality is real and the crowds love it.

Until a star athlete drops dead on the playing field.

Is it an accident or murder? FBI agents and Haden-related crime investigators, Chris Shane and Leslie Vann, are called in to uncover the truth—and in doing so travel to the darker side of the fast-growing sport of Hilketa, where fortunes are made or lost, and where players and owners do whatever it takes to win, on and off the field.

JOHN SCALZI is one of the most popular SF authors of his generation. His debut Old Man's War won him the John W. Campbell Award for Best New Writer. His New York Times bestsellers include The Last Colony, Fuzzy Nation,and Redshirts (which won the 2013 Hugo Award for Best Novel), and 2020's The Last Emperox. Material from his blog, Whatever, has also earned him two other Hugo Awards. Scalzi also serves as critic-at-large for the Los Angeles Times. He lives in Ohio with his wife and daughter.

Praise for Head On

"Particularly relevant....A fun, breezy thriller, one that showcases a world that carries with it some extremely astute commentary on some of the real problems that we face in our own. " —The Verge

"The Lock In universe is as fascinating as ever....Complex, expansive....Pretty damn cool." —RT Book Reviews, 4 stars

"Head On doesn’t care if you’ve read Lock In or not, but it does care if you enjoy a mystery wrapped up inside a science fiction novel....This might even be one of the best introductions to Scalzi out there." —Culturess

"[Scalzi's] prose flows like a river, smoothly carrying us through the story; his characters are beautifully crafted; and his future world is impeccably designed, at the same time wildly imaginative and wholly plausible." —Booklist, starred review

"This taut mystery, filled with memorable characters in a well-constructed world, will keep readers on the edges of their seats." —Publishers Weekly, starred review

"A snappy, cannily-driven police procedural in which Scalzi highlights and skewers contemporary issues and hypocrisies." —The Seattle Review of Books

Praise for Lock In

"This is the kind of thriller that Michael Crichton, Lincoln Child, and James Rollins do so well. Add John Scalzi to that list." —Douglas Preston, #1 New York Times bestselling author of The Kraken Project and Impact

“A smart, thoughtful near-future thriller…. This powerful novel will intrigue and entertain both fans and newcomers.” —Publishers Weekly, starred review

“John Scalzi may be the most entertaining writer in SF today.” —Toronto Star